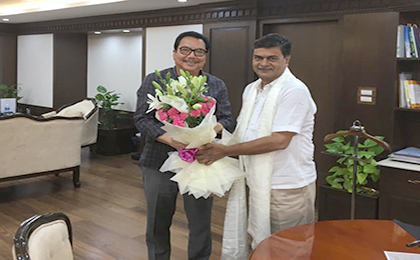 NEW DELHI, Jun 19: Union MoS (Independent) for Power & New and Renewable Energy, RK Singh, assured Arunachal Pradesh Deputy CM Chowna Mein that work for the Dibang Multipurpose Project (DMP) in Lower Dibang Valley district would begin soon.
The MoS gave the assurance when Mein called on him here on Wednesday.
Assuring the DCM of his support for robust development of the power sector in Arunachal, Singh said “two machines of the Kameng hydroelectric project (HEP) will be made functional soon, and the remaining two machines after six months.”
Mein apprised Singh of the power scenario in the state, and briefed him on the technical problems with the 600 mw Kameng HEP, which Mein said “needs to be solved immediately for early commissioning of the project.”
Informing that all formalities for the 2800 mw DMP have been completed, the DCM pressed the MoS for early start of the project.
Mein also informed Singh that the hydropower projects of 22 power developers in the state were terminated “due to their inability to make progress in the project work even after years of signing MoUs with the state government.”
He further requested the MoS to ensure early release of fund under the Saubagya scheme and the DDUGSY of the preceding year.
Emphasizing the need to expedite the Comprehensive Power Transmission Scheme, Mein also sought a package from the Centre to replace and renovate the old infrastructure to ensure uninterrupted power supply in the state.
He also requested the Centre to take “two transmission systems from Kopi-Tawang and Rupai-Namsai under the transmission scheme” as they could not be taken up under the NLCPR. (DCMO)