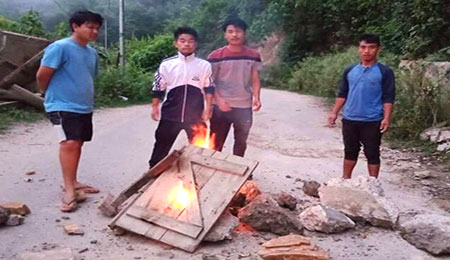 Staff Reporter
ITANAGAR, Jun 21: The first day of the 48-hour Kamle district bandh imposed by the All Kamle District Students’ Union (AKDSU) reportedly passed off peacefully on Friday.
Kamle DC Moki Loyi had on Thursday declared the bandh illegal and had ordered the union to call it off.
While no untoward incident was reported, the bandh crippled normal life as vehicles were off the roads and the shops in Raga, Tamin and Boasimla were shuttered throughout the day.
The AKDSU has imposed the district bandh to protest the authority’s alleged failure to meet its charter of demands.
Kamle SP John Pada informed The Arunachal Times over the phone that the first day of the bandh was largely peaceful.
“Other than burning of tyres on the roads and a few blockades, no untoward incident has been reported,” the SP said.
The AKDSU is demanding disbursement of 10 months’ stipends of students of Classes 6 to 8; implementation of Rs 100 lakhs sanctioned under the CMAPY for upgrading the model residential school in Godak; immediate release of the sanctioned amount for providing sanitary napkins to girl students under the 2018 CMFP; and inquiry into the allegation of fund misappropriation and improper implementation of the 2018-19 CMSSY and the ISSE scheme.