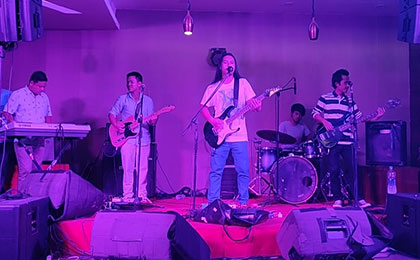 Staff Reporter
ITANAGAR, Jun 22: The capital’s first edition of World Music Day celebration was held here on 21 June with emerging artists such as Inime Tacho and the brother-sister duo of Ajati and Esha Mimi taking centre-stage with their covers of popular songs, as well as original numbers.
Besides the usual performances in English and Hindi, several artists performed original songs in the Nyishi, Adi and Galo dialects.
The powerful singing of Bicky Tamang and David Angu, with their band members, livened up the evening after a string of soothing performances, while Gammi Nasi’s offbeat guitar skills awed the audience.
Solo artists Carolina Norbu, Bharat Waii and Omak Komut also gave soulful performances with the support of fellow artists on varied instruments, and Sonam and the Band and Takar Nabam Trio concluded the event with a bang.
The Mimi siblings, who performed together for the first time on stage, expressed hope that the event would encourage more musicians to come out and promote the art.
The first event in the capital dedicated to World Music Day, the programme was a collaborative effort of independent artists of the state to showcase their skills, as well as provide more opportunities to promising artists.