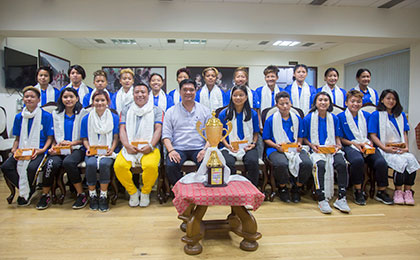 ITANAGAR, Jun 24: Chief Minister Pema Khandu on Monday felicitated the girls’ football team that played the finals of the Hero Sub-junior Girls’ National Championship in Cuttack, Odisha, and emerged runner-up, bowing out to Jharkhand in the summit clash.
The sub-junior girls, who turned up in their state jersey along with the trophy, were accompanied by their manager and coach, officials of the Arunachal Pradesh Football Association (APFA), and officers of the sports & youth affairs department.
The Arunachal team had a splendid run in the tournament, making history by becoming the first girls’ team from the state to make it to the final of the championship.
Till the final, the girls had an unbeaten run, with Tallo Ana scoring 15 goals in five matches. Ana remained the highest scorer of the tournament.
The state’s sub-junior boys’ team had also reached the final of the Hero Sub-junior National Football Championship in December last year.
Congratulating the girls and the officials, Khandu urged them to maintain their passion and not rest upon their laurels.
“Do not stop playing. Keep your passion for the game intact. Hone yours skills and aim for the sky. This is just the beginning,” he advised.
The CM attributed the recent surge in sporting events and its impact on youths to the Khelo India programme. He said that, with Kiren Rijiju, who hails from the state, as the new union MoS for sports & youth affairs, “Arunachal can expect a visible facelift in sports infrastructure and sports events.”
The CM commended the stupendous performance of the team, comprising girls hailing from different districts of the state, and lauded the unstinted support and dedication of the current office bearers of the APFA, headed by its secretary Kipa Ajay. He said the government is ready to support the APFA’s endeavours. (CMO)