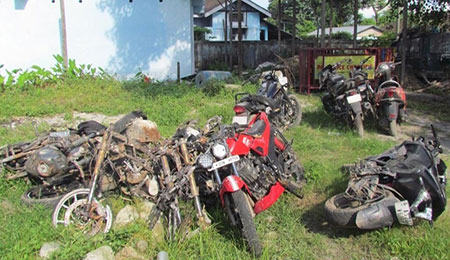 TEZU, Jul 1: A 23-year-old man, identified as Prem Towsik, died after meeting with an accident at the 34 Mile area near here at around noon on Sunday, Lohit SP DW Thongon informed.
“A written complaint was received from one Yalum Towsik (61), a resident of Bekhuliang village in Sunpura, informing that his son, Prem, met with an accident at 34 Mile,” the SP stated in a press release.
He said the body of the deceased was evacuated to the zonal general hospital here and postmortem conducted, before the body was handed over to the family for the last rites.
Thongon said the accident, and the death, was caused by rash driving on the part of some bikers from Assam.
One Ritu Raj Neog, who was involved in the accident with Towsik, was arrested and brought to the zonal hospital here, and later shifted to Dibrugarh in Assam for further treatment, “as referred by the doctor, under the escort of four police personnel,” the SP said.
Agitated family members and relatives of the deceased reportedly set on fire four motorcycles, belonging to the riders, at the accident site.
The investigating officer along with police personnel later seized the burnt motorcycles, and registered a separate case of arson at the police station here.
The SP informed that 40 persons from Assam had come to visit Tengapani, in Namsai district, on their motorcycles, after acquiring temporary inner line permits from the Lekang EAC. However, instead of staying at Tengapani, they entered Lohit district, the SP said.
The police have detained eight other persons at the police station here for security reasons.
“They have been booked under Section 3 of the BEFR Act, 1873, and will be produced before the court for externment from our jurisdiction,” Thongon said.