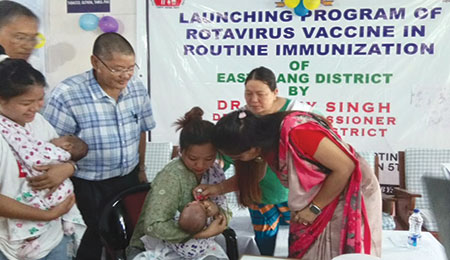 ITANAGAR, Jul 5: The Rotavirus Vaccine (RV) was launched in various districts on Friday. The vaccine is used to protect against rotavirus infections, which are the leading cause of severe diarrhea among the young children.
Launching the vaccine at Boleng CHC, Siang Deputy Commissioner Rajeev Takuk asked the ASHAs to create awareness about various health programmes being implemented by the government among the rural masses, particularly those residing in far-flung and inaccessible areas.
Highlighting the importance of the rotavirus vaccine and the recently launched intensified diarrhea control fortnight, DRCHO Dr. T Mize said the vaccine along with proper sanitation, hand washing practices, ORS and zinc supplementation will go a long way in reducing the mortality and morbidity due to diarrhoea in children.
Former minister Tahung Tatak, DMO Dr. R Darung, DANO Dr. P. Kamki, health officials, village heads and general public attended the programme.
The vaccine was also launched in Dibang Valley district by DC in-charge T Mitkong on Friday.
He urged the health officials to make the public aware about the vaccine and its importance to prevent diarrhea among children.
The DC further urged them to ensure percent immunization coverage in the district.
He also advised them to create awareness among the public to maintain good hygiene and sanitation practices to prevent communicable diseases.
Anini district hospital Medical Superintendent Dr. M.Milni advised his officials to carry out the vaccination drive sincerely.
“The oral Rotavirus vaccine will be available at all the government health facilities free of cost,” informed Medical Officer in-charge Dr. Kabak Tamar after the launch of the vaccine at UPHC Itafort near here on Friday.
The vaccine will be given to 6, 10 and 14 week-old children, the MO said.
“Diarrhea is one of the major killers in children and rotavirus is one of the most common causes of diarrhoea in them,” Dr. Tamar said.
Itanagar EAC Hengo Basar urged the parents to avail the benefits of the health programme and get their children vaccinated against diarrhea.
Itanagar ICDS project CDPO Jaya Taba also assured to give full support to the vaccination drive.
At Pasighat, East Siang DC Dr. Kinny Singh launched the vaccine in the district by administering the vaccine to a child at Bakin Pertin General Hospital.
Joint DHS Dr. D. Raina, DMO Dr. Kaling Dai and Medical Superintendent Dr. YR Darrang were also present on the occasion and administered the vaccine to children.
The DC urged all the stakeholders to join hands in spreading awareness on the vaccine in urban as well as rural areas.
Joint DHS Dr. Raina also urged all stakeholders to disseminate awareness on rotavirus vaccine in all sections of society.
DMO Dr. Dai informed that each year, around 1.5 lakh children die globally due to diarrhea and that 40 percent of the deaths caused by rotavirus can be reduced through vaccination.
Earlier, DRCHO gave an overview of introducing Rotavirus Vaccine and WHO’s recommendation on the vaccine. The DRCHO said the highly contagious rotavirus is more prevalent in children below 24 months.
Representatives from WASE, ABK, various religious bodies, bazar committee attended the programme.