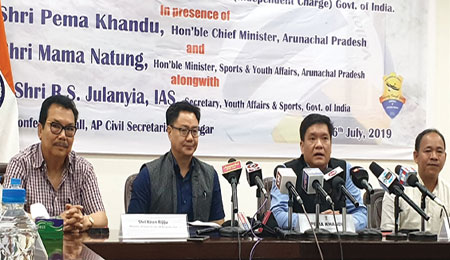 Staff Reporter
ITANAGAR, Jul 6: Youth Affairs and Sports Minister of State, Kiren Rijiju on Saturday informed that Arunachal will receive three centres of excellence (academies) for sports that will cover the disciplines of martial arts, weight lifting and boxing.
Set to be established in the capital with full residential capacity, the academies for the three sports discipline will begin with an intake capacity of 100 sportspersons each.
“While the academy for martial arts will cover judo, karate, taekwondo and wushu, the Sports Authority of India’s sub-centre for boxing will be developed to a full centre of excellence,” he informed, adding: “the academy for weight lifting is expected to be the largest centre in the North East.”
To achieve the ambitious projects, Rijiju assured that the centre will provide full budgetary support to the state government.
He said that no sportsperson from the state has participated in events such as the Olympics or the Asian Games and that this was a step forward to scouting talent from the state, hone their skills and send them to world-class sporting events.
Noting that the state has several football players and fans, he informed that about 12-15 artificial turfs (AstroTurf) will be laid in stadiums across the state within the next three years.
“The state government will decide on the stadiums and the central government is giving in-principle approval. As soon as a proposal is received (from the state govt), we will begin funding. This will be completed within three years,” he said.
The ministry is also considering opening academies across the state to promote games, such as archery and athletics under the Khelo India scheme in districts with potential.
In attempts to engage the youth in activities, the minister said that “the North East Youth Festival will be held in Arunachal this year.”
“The NE Youth Festival serves as a platform for the youth to participate in traditional sports and games, and there are opportunities for cultural exchange. Several other activities are required for the youth. If they aren’t engaged in the right direction or get into drugs or anti-social activities, then their assets become a liability,” he added.
He also informed that the centre plans on constructing more youth hostels across the country, and Arunachal will be included in it.
The union minister arrived here Saturday morning and was accompanied by Union Sports Secretary Radheyshyam Julaniya.
He had convened a review meeting with Chief Minister Pema Khandu, Deputy Chief Minister Chowna Mein, Sports Minister Mama Natung and Chief Secretary Satya Gopal before making the announcement later in the day.