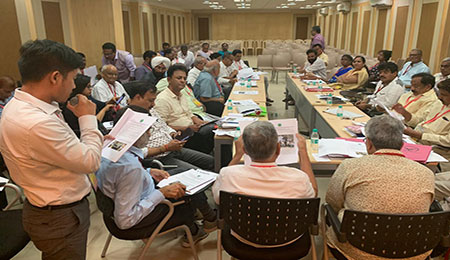 Staff Reporter
BENGALURU, Jul 6: “Safety of journalists continues to be a cause of concern and our demand for a special protection law needs a greater push and we need to put pressure on the government to pay heed to our demand,” Indian Journalists Union (IJU) general secretary Sabina Inderjit said during the ongoing two-day national executive council (NEC) meeting of the IJU, which began at the REVA University, Bengaluru on Saturday.
“Cases against harassment, attacks and killing of journalists just don’t seem to ebb,” she said while highlighting the latest case of burning Chakresh Jain, a journalist in Sagar district of Madhya Pradesh to death for his reportage, allegedly by a district level officer of the state government on 20 June.
The IJU general secretary informed that the SP set up an SIT, but there has been no progress, and recalled the 2015 case wherein Sandeep Kothari, a rural journalist in Balaghat district, was also burnt to death and his body left near a rail track.
The IJU further demanded immediate release of three journalists- Anuj Shukla and Ishita Singh of Nation Live, a noida-based news channel and Peer Mohammad, a freelance journalist from Gorakhpur district.
They were arrested by the Uttar Pradesh Police under the Bharatiya Janata party government for airing footage of the woman speaking to newsmen and for posting it on social media, claiming that she proposed marriage to Chief Minister Yogi Adityanath.
Earlier, freelance journalist Prashant Kanojia, who was also arrested by the UP Police on 8 June for posting on twitter the video of the woman, was granted bail.
“Though the Supreme Court granted him bail, saying that freedom of expression and other rights guaranteed in Constitution ‘are sacrosanct and non-negotiable,’ three other journalists were not so lucky and are languishing in jail. This shows the growing intolerance among the ruling elite over perceived adverse reporting and contrary opinion in the media,” she said.
Regarding the recent and deliberate target on journalists and photo-journalists covering political parties protest against the government in Chandigarh, wherein locals used water cannons to ensure that the telecast and broadcast of the protest did not reach the public, the IJU general secretary said that it amounts to “attack on press freedom and censorship.”
The IJU also condemned the arbitrary arrest of veteran Kashmiri editor Ghulam Jeelani Qadri of the daily Afaaq in a late night raid on his home by the police in Srinagar on 24 June, in a case going back 27 years–1992.
Though he was released on bail by the CJM as the police was unable to provide any clear details and specific justification for his arrest, the IJU demanded an inquiry and has written to the Press Council India (PCI) to take suo moto notice as the action negated the rule of law in the state, now under President’s rule.
Highlighting the attacks on digital media, she said while both men and women journalists are being trolled online if their views are against the ruling dispensation, “women seem to face the bigger brunt as not only are remarks sexist but there are threats of raping them.”
The IJU demanded that the real people behind such trolling armies be brought to book.
She also questioned the coverage of general election and assembly elections in few states by the media and said that the media failed to build public opinion on issues that matter while covering the elections.
“Instead, what we saw and read in the media was what the ruling government at the centre and of states wanted to say. The focus was on the campaigning and claims of the party in power rather than the media taking a close look at the issues which were at stake for the public,” she added.
Representatives from 15 states unions affiliated to the IJU presented their state report on the first day of the NEC meeting which was presided over by IJU president Amar Devulapalli.
Arunachal Pradesh Union of Working Journalists (APUWJ) president Amar Sangno in its state report highlighted the activities initiated by the union and the recent meeting with the Arunachal Chief Minister Pema Khandu, who assured to look into the demands of the working journalists in the state.
Arunachal Press Club president Dodum Yangfo and NEC member Taya Bagang also attended the meeting.
Earlier, REVA University Chancellor Dr P Shyama Raju, who inaugurated the two-day IJU-NEC meeting, in his speech said, “This University dreams to produce good journalists”.
Karnataka State journalists Union (KSJU) is hosting the two-day NEC meeting.