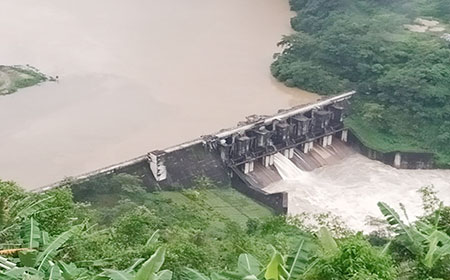 Staff Reporter
ITANAGAR, Jul 8: The North Eastern Electric Power Corporation (NEEPCO) has released water from the Ranganadi Hydro Electric Project (RHEP) dam in Yazali, in Lower Subansiri district, leading to panic in the downstream areas.
As per report, the water was released starting on Saturday, and the heavy rainfall in the last two days has further increased the volume of the water in the dam.
The volume of water released by the NEEPCO has also increased, thereby causing flooding in the downstream areas, especially in Lakhimpur district of Assam. However, there has been no report of flooding in downstream areas like Lichi and Sher in Papum Pare district.
The situation is precarious on the Assam side. The deputy commissioner of Lakhimpur district has issued an order cautioning the public to refrain from venturing into the Ranganadi river for fishing, swimming, plying of boats, etc, to avoid any eventuality. People living in the low-lying areas near the river have also been advised to remain alert but not to panic.