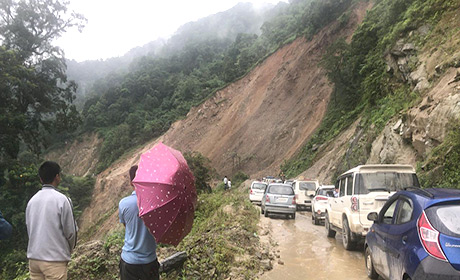 Staff Reporter
ITANAGAR, Jul 12: One person was reportedly injured by a shooting stone at the block point in Laptap, in Toru circle of Papum Pare district, on Thursday when a mudslide occurred at the block point.
The man was reportedly trying to cross the block point despite being cautioned against doing so by the staff of Sushee Infra, the construction firm. He was later taken to the Toru CHC for first aid.
Sources informed that incessant rains have been triggering continuous landslides on the Itanagar-Sagalee-Seppa road. Scores of people and vehicles were reportedly stranded on either side of the Laptap block point due to heavy mudslides.
The block in Laptap has affected people travelling to Sagalee, Pakke-Kessang and Seppa. Though Sushee Infra’s staffers are working on a war footing to clear the block, continuing rainfall has been making their efforts extremely difficult.