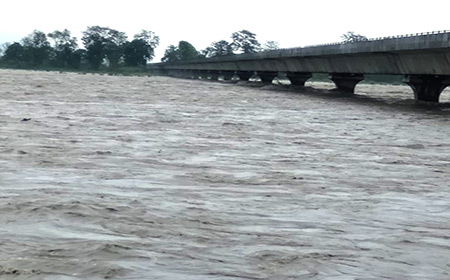 Staff Reporter
ITANAGAR, Jul 12: Following heavy downpour, the Dibang river is experiencing an unprecedented rise in its water level and posing a serious threat to the new bridge over the river in Lower Dibang Valley district.
The ravaging river is eroding the abutment of the bridge on the Bomjir village side at a considerable pace, according to villagers.
“We never witnessed such rise in the water level ever. This must be the highest water level ever recorded,” said Yoi Lego, a resident of Bomjir.
“At the pace of erosion of the abutment, the bridge will collapse easily. The authority should find a mechanism to control the erosion, or else it would be too late,” Lego said.
On being contacted, the Roing WRD EE informed that the Dibang river is “flowing above 218-19 metres which is 3.5 metres higher than in 2015.” 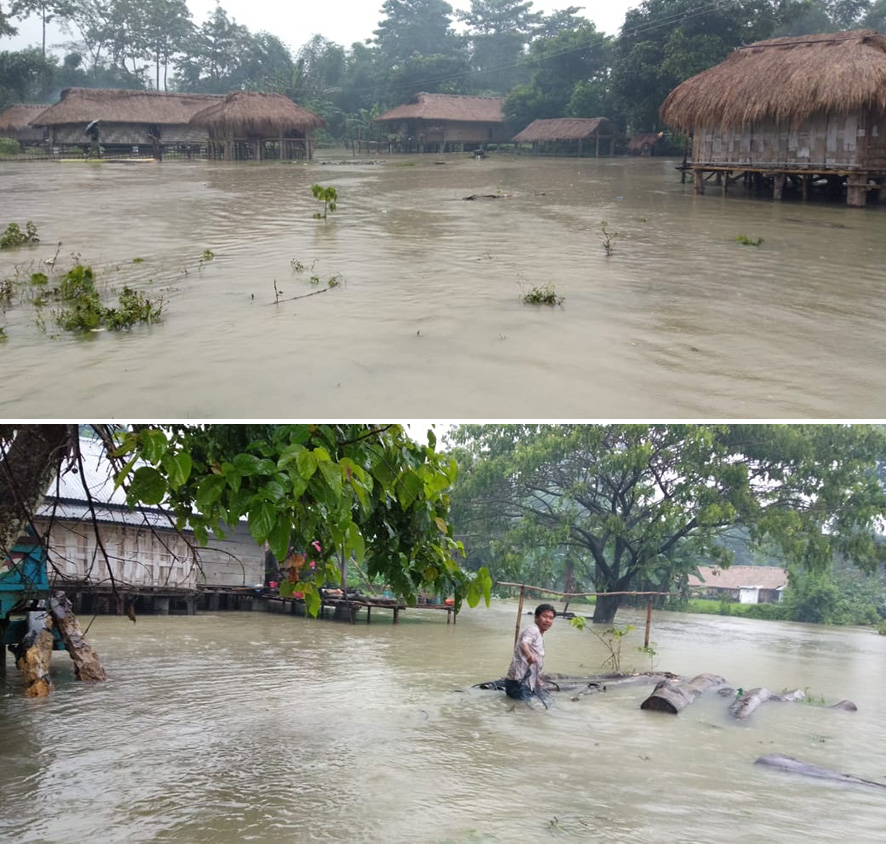 The EE informed that erosion of the CC guide bund built by the Navayuga Engineering Co Ltd (NECL) is occurring at a rapid pace.
“The rainfall in Dambuk on 12 July is 370 mm, and the discharge of the Dibang river at the bridge point is 21894.85 cumec,” the EE said. “If erosion of the CC guide bund is not stopped, it will erode the abutment and will put the bridge and National Highway 13 in danger.”
“It has to stop immediately, or else it will affect the adjoining villages and cultivation lands,” the EE added.
The bridge, which connects Dambuk and Roing, is called the “liberator bridge” by the locals as it “liberates” Dambuk subdivision from geographical isolation, especially during summer.
Before the bridge had been built, Dambuk used to remain isolated for six months during the summer. Now the bridge is the lifeline to most parts of eastern Arunachal, like Anjaw, Lohit and Namsai districts.
The 6.20-km bridge, constructed by the NECL, is the second longest bridge in India, after the Dr Bhupen Hazarika bridge. Its construction had started in 2013, and it was commissioned in 2018.
Chief Minister Pema Khandu and Chief Secretary Satya Gopal had inspected the bridge last year when local residents brought the matter of rapid erosion to their knowledge.
It is understood that the CM and the CS had assured to initiate measures to protect the bridge abutment, but the assurance has not materialized.
Official sources informed that Rs 12 crore had been proposed in the North Eastern Council through the WRD to build a guide bund to protect the bridge from erosion. But the fund was reportedly returned for unknown reasons.

Meanwhile, floodwaters caused large-scale damages to the drinking water supply systems in Pasighat and Mebo in East Siang district, disrupting water supply.
The main water pipelines from Tebo, Bosing and Sippi water sources, and the village water supply systems in Bilat and Ruksin have been completely damaged. The damages mostly occurred at river crossings and head-works.
“However, drinking water supply in several villages has been restored temporarily,” informed Pasighat PHE Division AE Tadung Padung, adding that restoration of other affected pipelines will be carried out when the water recedes.
Floodwaters also caused major structural damage to the drinking water project in Mebo. While the main 200 mm pipeline got damaged at the Sukkan Nallah crossing, several supporting pillars, anchor blocks, and a few DI pipes were also washed away by flashflood, informed Mebo PHE Division AE Kabong Tayeng.
He said several pipelines have also been buried in sand and debris. (With DIPRO input)