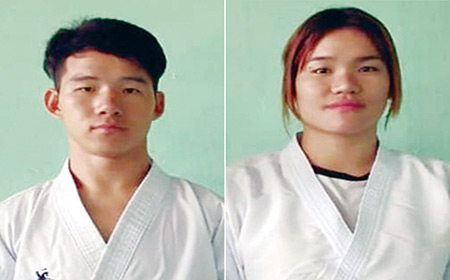 Staff Reporter
ITANAGAR, Jul 12: Raja Yangfo and Johny Mangkhiya of Arunachal Pradesh will represent India at the 16th AKF Senior Karate-Do Championship to be held at Tashkent, the capital city of Uzbekistan, from 15 to 21 July.
Yangfo and Mangkhiya will compete in the men’s and women’s individual kumite in the below 60 kg and 68 kg bodyweight category, respectively.
The Karate Association of India (KAI) has nominated Arunachal Karate Do Association general secretary Bulang Marik to officiate the championship as referee, and P Nobin Jomoh as coach of the Indian team.
KAI president Hanshi Likha Tara, along with both the karatekas, Marik and Jomoh left here for New Delhi to join the national team, from where they will leave for Tashkent.