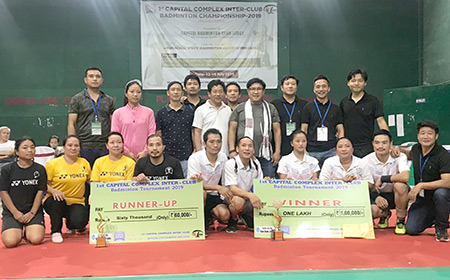 ITANAGAR, Jul 14: Senki Park Badminton Club (SPBC) on Saturday defeated hosts Capital Badminton Club (CBC) 3-1 to be crowned champions of the first edition of the Capital Complex Inter-Club Badminton Championship.
The finals of the tournament, which was played at the MLA cottage badminton stadium here, saw SPBC win the women’s singles, women’s doubles and men’s doubles titles, while the CBC could only register a win in the men’s singles category. The contest was a best-of-five playoff.
With the win, SPBC walked home with a cash prize of Rs 1 lakh and the championship trophy, while the runners-up were awarded Rs 60,000.
Former home minister Kumar Waii, who gave away the prizes to the participants, said that, being a sportsperson himself, he would keep supporting sportspersons and sports-related events. He also urged youngsters to take up one sport or the other “to stay fit and healthy in life.”
Earlier, CBC general secretary Gem Tada said he along with the organizers of the tournament were quite impressed with the turnout of participants for the competition.
“The main motive of organizing the tournament was to encourage more people, particularly youngsters, to take up sports, especially badminton, and provide them with a stage to showcase their talent. We expect to see more participants in the next edition,” Tada said.
Thanking Waii, Deputy Speaker Tesam Pongte, Nampong MLA Laisam Simai and other government officials who were present to witness the finals, Tada said their presence would “indirectly motivate the players, especially the budding ones.”
The two-day competition was organized by the CBC under the aegis of the Arunachal State Badminton Association.