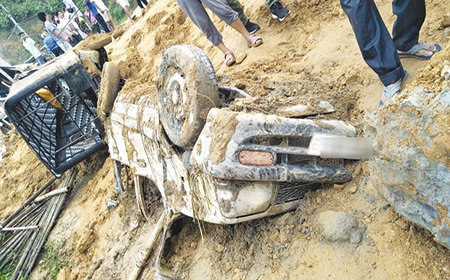 Staff Reporter
ITANAGAR, Jul 17: A massive landslide occurred here on Wednesday morning at the national highway 415 near the police headquarters (PHQ) here in Gohpur area, injuring two persons and damaging several vehicles and shops nearby.
A portion of the hill near the PHQ had collapsed at around 9 am, triggering a massive landslide and critically injuring two persons, identified as Biri Tath and Tarin Mosu.
According to eyewitnesses, Tath was driving his car (A maruti 800) and Mosu, who is an auto driver by profession, was riding his auto at the time of incident.
Bystanders acted promptly and pulled the two out of the mud.
Currently in the RK Mission Hospital here, the condition of both the injured is stated to be critical.
Several other vehicles passing through the area were also caught off guard. While their vehicles were damaged, the drivers and passengers escaped unharmed.
The NH 415 also remained blocked for hours.
Home Minister Bamang Felix also arrived at the spot and took stock of the situation. Later, he visited the injured in the hospital and assured all possible support from the state government.
Talking to the media, the Home minister appealed to the people of the state to “stay away from flood, landslide prone areas and be in safer places.”
“I urge the people to be vigilant, active and be prepared during the monsoon in order to avert any eventualities and disasters,” Felix said.
He also extended gratitude to the people who came forward and volunteered in saving precious lives.
“The generous deed of theirs will be remembered for a very long time. I also take opportunity to acknowledge the prompt response of the NDRF team to the disaster. Along with them ITBP, SDRF, CRPF, state police and district administration have all done commendable job in ensuring that a major tragedy was averted,” the Home minister said.
Chief Minister Pema Khandu also expressed grave concern over the rains posing danger to life and properties of the people and disrupting normal life across the state.
He expressed shock and pain on the reported incidents of landslides in the state and assured government support to those injured in the calamity, besides providing gratuitous relief to all victims as per norms.
The chief minister called for concerted efforts of all district administration, police, disaster management department, works department in averting disaster.
He also appealed for active participation of civil societies in expediting restoration of amenities to the extent possible despite all odds.
Khandu further asserted that essential services will be made available to the citizens at the earliest.
While cautioning people living in flood and landslide prone area to be alert, he urged commuters travelling on landslide-prone zones to be “extra careful” and to “strictly adhere to the instructions” issued by local administrations from time to time.
“The government is privy to the situation and has put in place measures to tackle any untoward incident. Though we may not always succeed in tackling nature’s fury, but with people’s co-operation, many precious lives and valuable properties can be saved,” he said.
Capital Complex Deputy Commissioner Vikram Singh Malik monitored the restoration work and was present at the site along with Itanagar SDPO Dekio Gumja and other officials of the district administration.