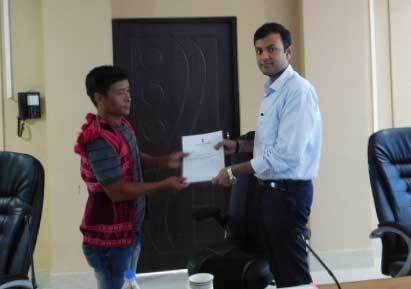 TEZU, Jul 18: Lohit Deputy Commissioner Prince Dhawan launched the e-Prison application at the district jail here on Thursday, making Lohit the first district in Arunachal to adopt the app.
“It is a huge achievement for Lohit as e-Prison has been launched for the first time in the entire state,” the DC said after launching the app.
He said the introduction of the app would make the prisoner management system in the district more robust, efficient and accurate.
Dhawan asked the DSP to “immediately do away with the process of manual filing and process all the correspondence and data related to the district jail through the e-Prison henceforth.”
Earlier, the DC launched the e-Service Plus app in his office here, in the presence of government officers, representatives of several organisations, and others.
Dhawan informed that ST, PR, income, dependant and character certificates will henceforth be issued through e-Service Plus.
“The zero-cost, paperless system will bring more accountability, reliability, transparency and fast service deliverance to the denizens of the district, and the practice of running from one office to another for getting mere certificates will be a thing of the past,” he said.
The DC commended the effort of DIO June Kadu and his team for implementing the project in the district within a short span of time, and requested the members of the CALSOM, the AMWWS and the market committee to disseminate information about the app throughout the district.
Digitally signed certificates were distributed to several beneficiaries on the occasion. (DIPRO)