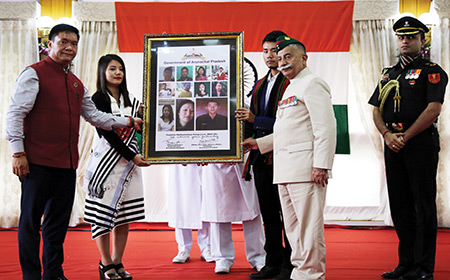 ITANAGAR, Jul 26: As the country commemorates the 20th Kargil Vijay Divas, Governor BD Mishra along with Chief Minister Pema Khandu and DCM Chowna Mein paid floral tributes to the martyrs of the Kargil war – ‘Operation Vijay’ – in a commemoration event held at the Raj Bhavan here on Friday.
This was followed by people from different fields, parents of Kargil war martyrs, Kargil war participants, 20 Madras Corps Commanding Officer Col Vikram Nalawade, retired IAF wing commander Gyati Kago, senior government officers, ITBP jawans and NCC cadets paying respects to the martyrs.
Honouring the martyrs and their families, the governor and
the CM felicitated Dinuo and Neiselie, parents of martyrs Captain Neikezhakuo Kenguruse (Maha Vir Chakra, posthumous) and his siblings Mhozienuo and Viketoulie.
Kargil war heroes, Subedar Imliakum Ao (Maha Vir Chakra), Col Gurpreet Singh (Sena Medal, gallantry) and Subedar Harinder Singh, a battle casualty of Kargil war, were also felicitated during the function.
The felicitated war heroes gave inspiring talks and shared their combat experiences during the war.
The governor recalled the sacrifices made by the Kargil war martyrs in defence of the nation. He said it was an honour for every attendee at the function in the Durbar Hall to be in the company of the parents and siblings of martyr Captain Neikezhakuo Kenguruse, winner of Maha Vir Chakra.
Mishra reminded the people of their duty towards the martyrs’ families, and urged them to not forget their sacrifices and provide all help required by the war heroes and the martyrs’ families.
He also remembered the laudable tradition of the Indian armed forces of providing proper burial to the fallen enemy soldiers of Pakistan in accordance with their customs.
Students of premier institutes of higher education of the state, such as Rajiv Gandhi University, the North Eastern Regional Institute of Science & Technology and the National Institute of Technology, presented patriotic music and songs on the occasion.
The Army Pipes and Drums from the 7th battalion of the 8th Gorkha Rifles played ‘Sare jahan se achha Hindustan hamara’ and ‘Deso ka sartaj Bharat’ tunes for the assemblage.
Earlier, the event began with presentation of a guard of honour by troops of the ITBP, in memoriam to the Amar Jawan, while the bugler played The Last Post and Rouse Reveille.
The state BJP also celebrated Kargil Vijay Divas at the party’s office here.
Addressing the function, Deputy Speaker Tesam Pongte extolled the sacrifices made by the Indian soldiers, while state BJP vice president Dominic Tadar recalled the sacrifices of the soldiers in the Kargil war and said “we should never forget the people who sacrifice their today to secure our tomorrow.”
Party vice president Kipa Babu highlighted the circumstances that led to the Kargil war, and lauded the then BJP government for “taking strong action at that point of time.”
All the participants, including state office bearers and senior party leaders, paid floral tributes to the Kargil war heroes during the function, which was organized by the Bharatiya Janata Yuva Morcha (BJYM).
Earlier, members of the BJYM, led by its president Taring Tiri, organized a donation camp at its office for the widows and families of the Kargil war martyrs.
The Himalayan University also celebrated the day and paid homage to the brave souls who laid down their lives for India’s victory during the Kargil war.
The university’s vice chancellor, Prof HS Sharma, highlighted the importance of the day. (With inputs from Raj Bhavan)