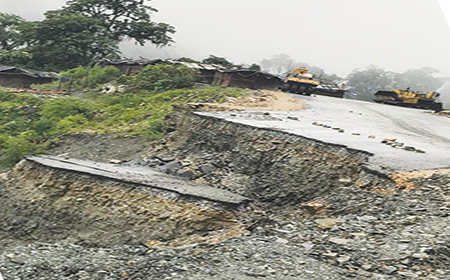 BOMDILA, Jul 29: West Kameng DC Sonal Swaroop on Monday inspected the entire stretch of the Balipara-Charduar-Tawang (BCT) road under the district’s jurisdiction to review the status of the road, which has been closed to traffic till 15 August.
The DC had by an order on 11 July prohibited movement of all types of vehicles on the BCT road from Pinjoli bridge to Tenga upto 15 August, in order to enable the BRTF to clear the debris and carry out restoration and construction works on both the BCT and the Orang-Kalaktang-Shergaon-Rupa-Tenga roads.
The DC also interacted with the affected families of Kaspi village who had suffered nature’s fury on 8 July, in which a life had also been lost.
Swaroop assured the affected families that relief would be provided on Monday itself from the Singchung ADC, through the PFMS, for the damaged houses and hotels.
The DC observed that although the new diversion alignment work on the BCT road ahead of Jamiri circle is progressing, the 93-97 km stretch of the road remains blocked and very few machines have been deployed there.
“It would help the public, tourists and the agency themselves if the BRTF deployed more excavators and placed more manpower to expedite the work and ensured timely completion of the project, which is of strategic importance,” she said.
The DC also said that the blacktopping on the road at various stretches in between 100 and 103 kms have been washed out by heavy downpour, “making it a hazardous zone.”
She, however, added that “the widening work involving earth-cutting from the Nechiphu tunnel onwards has been done at a good pace.” (DIPRO)