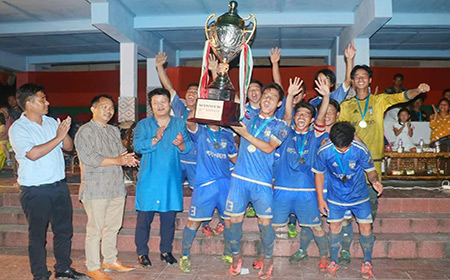 [ Karyir Riba ]
ROING, Jul 29: Cheta United FC and BT XI have lifted the boys’ and girls’ trophy, respectively, of the 12th Naba Ita Pulu Memorial Cup (NIPMC) 2019 tournament which saw teams participating from Lower Dibang Valley (LDV), Dibang Valley, Lohit and Anjaw districts.
The final of the annual football tournament was played between Cheta United and Mayu FC on Sunday at the Kera Aa Jubilee Ground here in LDV, where the former won the match via penalty shootout by leading with two goals (4-2).
The ‘hero of the match’ title was given to Mambu Mega from Cheta United.
The winning team won the trophy and a cash prize of Rs 70,000, while the runner-up team was given a trophy along with a cash prize of Rs 50,000. Many other prizes for various titles were also awarded.
The award for the highest scorer of the tournament was given to Budho Tayu (Cheta United), while Agano Linggi (Mayu FC) was declared the best player of the tournament. The best goalkeeper award was given to Elako Linggi (Cheta United), while Kuku Linggi (Mayu FC), Deho Mega (Intaya Public School), Jumu Pulu (Abango FC) and Sindhi Pulu (GHSS) were declared the ‘rising players of the tournament’.
In the girls’ category, the final was won by BT XI, who defeated Tafragam FC by a 3-0 score. The ‘hero of the match’ title was given to Maidyamsai Tailu (Tafragam FC). The highest scorer of the tournament was Techi Akung (9 goals, BT XI), the best player of the tournament was Kai Rumi (BT XI), the best goalkeeper was Maidyamsai Tailu (Tafragam FC), and the ‘rising player of the tournament’ was Laame Linggi (Roing United FC).
The winning team received a cash prize of Rs 30,000 along with trophy, while the runner-up team received a trophy and a cash prize of Rs 20,000.
MLA Mutchu Mithi, Rajya Sabha member Mukut Mithi, BJP Kisan Morcha state VP Dhature Miuli, SP Sanjay Kumar Sain, Sports & Youth Affairs JD Ramesh Linggi, and DSO Raju Mipi were also present at the closing ceremony.
The tournament was organized under the theme ‘Attack addiction’ and ‘Women power’ by the Naba Ita Pulu Memorial Cup Committee 2019, with support from the sports department, the District Olympic Association, and the district administration.