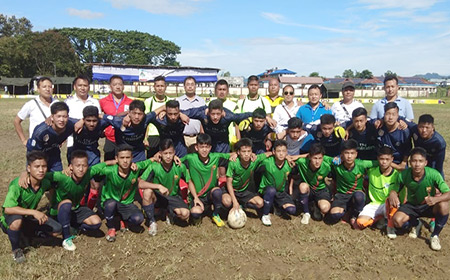 GSS Motum to lock horns with GHSS Seppa in final

ITANAGAR, Jul 29: GSS Motum (East Siang) defeated GHSS Yingkiong (Upper Siang) by 2-1 goals in the first match of the semifinals to enter the final of the 8th U-17 boys’ state level Subroto Mukerjee Cup football tournament here on Monday.
GSS Motum’s India Saroh and Anggit Moyong scored a goal each in the 24th and the 43rd minute, respectively, while Okeng Tali of GHSS Yingkiong scored the lone goal for his team in the 19th minute.
In the second match, GHSS Seppa (East Kameng) defeated GHSS Bomdila (West Kameng) by 3-0 goals to enter the final.
GHSS Seppa’s Pitam Yangfo scored two goals, while Lapung Sanggyu scored one goal.
GSS Motum will take on GHSS Seppa in the final match of the state level tournament on 29 July.
“The final match will be played at the DNGC playground at 2 pm. DDK Itanagar will cover the final match and will telecast the final match on deferred live on Tuesday on Channel No 1514 of Dish TV at 8 pm. The repeat telecast of the match can also be seen next week on DD Sports,” informed Youth Welfare Officer L Sokun Singh in a release.