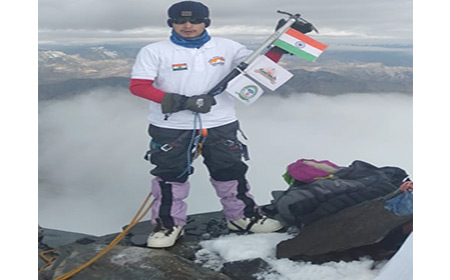 [ Taro Chatung ]
ITANAGAR, Aug 2: Arunachalee mountaineers Tagit Sorang and Tabu Dayam climbed Mt Kang Yatse-II, standing at 6250 m, in Ladakh in Jammu & Kashmir, on 31 July.
They were part of a 15-member summer mountaineering expedition mounted by Hyderabad (Telangana)-based Boots & Cramphone Pvt Ltd.
The team started their expedition from Samchugdo village, in Leh, on 28 July, and reached the base camp on 30 July, after three days of continuous trekking.
The team set out from the base camp on the midnight of 30 July, and three of the climbers reached the top of the peak at around 7.04 am, and another eight about 50 minutes later.
Tagit and Tabu were sponsored by the sports & youth affairs department of Arunachal.
Mt Kang Yatse-II is a B Group peak and every mountaineer usually climbs such peaks as part of their pre-Everest training. Both Tagit and Tabu are aiming to climb Mt Everest in the near future, and both have already undergone basic and advance mountaineering courses from Dirang (West Kameng)-based National Institute of Mountaineering & Allied Sports.
Tagit climbed the 6000-mtr Island Peak, located in the Everest range in Nepal, in April last year as part of his pre-Everest expedition.