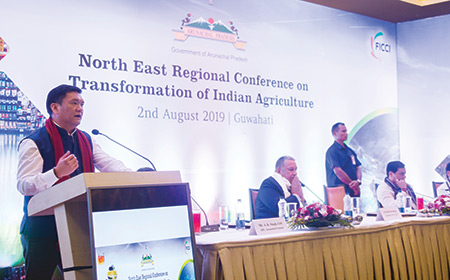 GUWAHATI, Aug 2: Arunachal Pradesh Chief Minister Pema Khandu on Friday advocated providing farmers with accurate and timely market information to enable them to make informed decisions about what to grow.
“Arunachal produces world-class horticulture and agriculture crops, but due to lack of proper market information on demand and price, there is always a mismatch between farm produces and the actual demand,” the CM said during the North East Regional Conference on Transformation of Indian Agriculture here in Assam.
Stating that there exists a huge gap between actual market demand and production, Khandu urged the union commerce ministry to step in to empower the farmers to make informed decisions.
“Handholding is required in a professional way to guide the farmers in their production and marketing decisions,” he said.
Khandu, who is also a member of the High-Powered Committee on Transformation
of Indian Agriculture (HPCTIA) formed by the NITI Aayog, said the focus of the conference was to gather inputs and suggestions for preparing a roadmap for transforming Indian agriculture in the next few years.
The objective of the conference was to derive inputs from all the NE states and industry experts, which will be incorporated in a report for submission to the high-powered committee formed by the NITI Aayog in its next meeting, scheduled to be held in Mumbai on 16 August.
Khandu said the time had come for “all the policymakers and technocrats to focus on sustainable and resurgent agriculture which is robust, productive, climate resilient and pro-farmer.”
The HPCTIA, headed by Maharashtra CM Devendra Fadnavis, has been holding a series of conferences across the country for preparing a roadmap for the agriculture sector, which will be submitted to the Centre in the next few weeks.
The conference, which was organised by the Arunachal government in association with the TERI and the FICCI, was also attended by Assam CM Sarbananda Sonowal, FICCI NE Regional Advisory Council Chairman Ranjit Borthakur, TERI NE Regional Director Dipankar Saharia, APEDA AGM Sunita Rai, and others.
Apart from the dignitaries, agriculture experts, industry experts, and officers of the agriculture and allied departments of Arunachal attended the conference. (CMO)