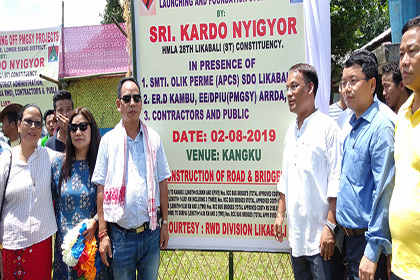 KANGKU, Aug 2: The persistent ‘No road, no vote’ movement of the Galo People’s Forum (GPF) appears to have finally borne fruit with Likabali MLA Kardo Nyigyor on Friday laying the foundation stone for constructing a PMGSY road to Kankgu circle in Lower Siang district.
The MLA flagged off the road’s construction at the same function.
The road will be constructed in phases – from Bali to Kangku (30 kms), Kangku to Siloni (14.01 kms), Siloni to New Hime (10.50 kms), and from New Minmang to Rupai (14 kms).
Addressing the gathering here, Nyigyor urged the people of the circle to cooperate with the contractor and the district administration to ensure quality work and fast completion of the road.
He, however, advised them to report to the administration or the executing department if they find that the quality of the work is being compromised with.
“The road was a dream project of 26 villages for many years and it should be completed in the stipulated timeframe,” the MLA said, adding that he would personally monitor the progress of the work.
Nyigyor said blacktopping of the Gensi road is his next priority.
“The work should be inspected by the district administration timely. Also, the people should know that they cannot demand any land compensation as the rule states that no compensation will be provided under the PMGSY project,” he said.
DC (in-charge) Olik Perme, who was also present at the function, said the circle had been deprived of a road for decades, and “therefore the people should appreciate the hard work of the MLA to bring the project at the earliest.”
“Once this road is competed, it will ease all people with road communication and other business,” she said, and requested the GBs to “check the people creating unnecessary problems for the working contractors and labourers.”
Representatives of the executing firms gave assurance that the road would be completed within the timeframe, and sought support from the local monitoring committee, the village heads, and the public.
PMGSY Local Monitoring Committee chairman Tagi Yomgam assured the executing firms that they would receive cooperation and logistic support, but said the work should be completed according to the project guidelines and norms.
“The people could not get a good market to sell their products due to the lack of good road connectivity. It also had impact on medical, education and other development,” Yomgam said.
In 2017, about a week before the bye-election to Likabali, the GPF had announced its ‘No road, no vote’ movement and intimated the state government about it. The forum had called for boycotting the election, and almost 90 percent of the villagers had signed not to cast vote until the state government provided “concrete acceptance” in written form to construct the road.