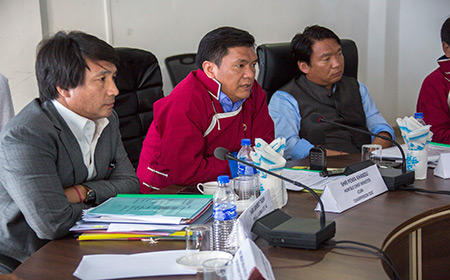 TAWANG, Aug 7: Chief Minister Pema Khandu has said that the Rs. 100 Cr fund allocated under Chief Minister Comprehensive State Road Plan (CMCSRP) will be used for improving motorable roads in all administrative headquarters of the state.
He said this while chairing a district development committee meeting held here on Wednesday, which was attended by Tawang MLA Tsering Tashi, Lumla MLA Jambey Tashi, Tawang DC Sang Phuntsok, Tawang SP Sagar Singh Khalsi, HoDs, officers from various government departments and public leaders.
“Topmost priority will be accorded to road communication. If good connectivity is achieved all other development will fall in line. Besides health and education sector, the state government is giving high priority for development of agriculture and allied sector,” the CM said.
Chief Minister urged the district development committee in each district to prepare a short term as well as
long-term 5-year perspective development plan for the district.
He said ‘whenever the financial position of the state is good, priority on the proposals from the districts will be set.’
He emphasised on teamwork between elected representatives and government officers to strengthen the planning process in the state. He also said elected representatives require proper support and guidance from the government officers to work on best proposals.
Emphasising on the need to abandon old path and to adopt a good working culture, Chief Minister said corruption will not be tolerated and urged the heads of the departments to have proper plan and vision for the department. He directed the officers to focus on revenue generation and informed that the state government has set the target of Rs. 2500 Cr this financial year. (CMO)