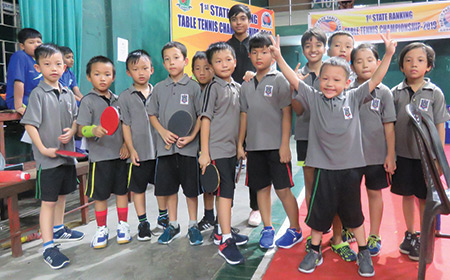 Staff Reporter
ITANAGAR, Aug 9: The first Arunachal Pradesh State Ranking Table Tennis Championship began at the MLA Cottage indoor hall here on Friday.
Ninety-six paddlers from various districts, sports academies, schools, DDK Itanagar, and the NERIST are participating in the two-day event, organized by the Papum Pare Table Tennis Association (PPTTA) under the aegis of Table Tennis Arunachal (TTA).
A total of 24 medals – eight gold and equal numbers of silver and bronze – will be up for grabs in the championship being held in the cadet, sub-junior, junior and senior categories (both men and women).
Arunachal Olympic Association (AOA) secretary-general Abraham K Techi, who declared the championship open, emphasized the need for nurturing young sports talents, so that they can represent the state and the country at Asian and Olympic Games in the future.
Stating that Asian or Olympic level sportspers-ons are not built overnight, he said, “It is our duty to identify the right talent at the right age, and support and train them.”
“It may be due to our wrong policy or some other reasons due to which we are still unable to produce a sportsperson from Arunac-hal to represent the country at the Asian Games,” lamented the AOA official.
Stating that building sportspersons is a continuous process which requires time and effort, Techi said, “Unfortunately, our sports bodies have not been able to do the same, barring in a few disciplines.”
He, however, said many sports organizations which had been lying defunct for years “are becoming active after Kiren Rijiju became the sports minister,” which, Techi said, “is a good sign for sports in Arunachal.”
Unlike in the past, when parents used to discourage their wards from playing, games and sports are nowadays pursued very seriously and sincerely, Techi said, and highlighted the monetary benefits, glamour and fame involved in sports.
Stating that table tennis is still in a nascent stage in Arunachal, he advised the TTA to work hard to promote and popularize the sport in the state.
Techi informed that the State Olympic Games will be conducted in October or November this year and the medal winners will be selected to represent the state in the second edition of the North East Games, which will be hosted by Arunachal in 2020.
TTA secretary Passang Dingla and PPTTA secretary Bengia Tada also spoke.