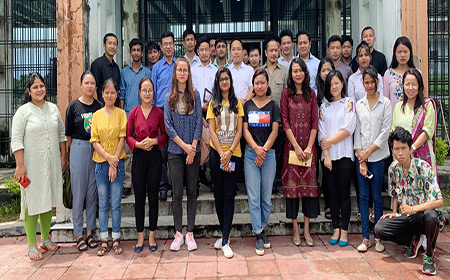 RONO HILLS, Aug 23: The mass communication department of Rajiv Gandhi University organised an orientation programme for its students here on Friday.
Addressing the participants, Arunachal Pradesh Union of Working Journalists President Amar Sangno advised them not to compromise on journalistic integrity.
“Do not lose your integrity to impress the authority,” said Sangno, who is himself an alumnus of the university.
He also spoke on how journalism is in peril due to the rising number of unreliable news sources, and on how to tackle the situation by “sticking to credibility.”
Arunachal Chamber of Commerce and Industries secretary-general Toko Tatung spoke about his academic journey from a government school to St Stephen’s College.
Tatung, who is an entrepreneur and the proprietor of Naharlagun-based E&Ks restaurant, encouraged the students to “have the courage to swim against the tide” when there is wrong being done.
“Respect the authority, but do not be in awe of it, or it will trample you,” he said.