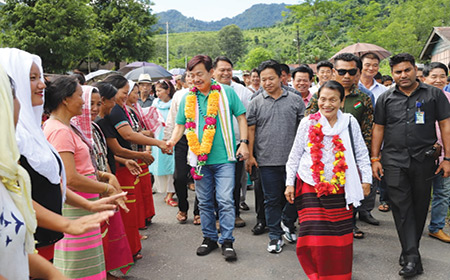 DAMBUK, Aug 24: Arunachal East MP Tapir Gao on Saturday donated Rs 2 lakhs to cover the fuel expenses for the earthmovers currently being employed to remove muck from the Sisar river here in Lower Dibang Valley district.
Debris and muck from road construction activities had made their way into the river near Dambuk, which had led to the Sisar changing its course. Youths from the area soon gathered to form a committee that is currently involved in the removal of muck from the river to divert it back to its original course. The earthmovers have been provided by the executing agency and a local resident of Dambuk.
Gao visited the site after attending a district development coordination and monitoring committee meeting in Tezu – his first since the election. He was accompanied by Dambuk MLA Gum Tayeng.
Interacting with the residents, Gao said he would submit a proposal for a flood protection scheme to the state government.
The MP said he had seen videos of the floodwaters entering agricultural fields near the river and was saddened by the images.