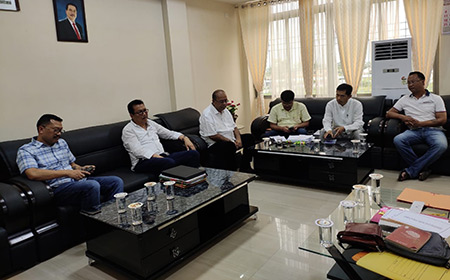 NAMSAI, Aug 31: Deputy Chief Minister Chowna Mein on Saturday called for continuing the developmental activities in Namsai district while prioritizing development of road connectivity.
Chairing a meeting of the district planning board here, the DCM asked all works departments to “incorporate their schemes under the budget.”
Suggesting that staff quarters be included in schemes for infrastructures like hospitals and offices, Mein stressed the need to “take special care with regard to water supply and drainage in the new staff colony being developed in Namsai town.”
The DCM reminded the officers that “revalidation should be processed for all ongoing projects under the Special Area Development Authority and the Social and Infrastructure Development Fund, and those approved under RE.”
In the matter of construction of a crematorium, which had been included in the budget speech, Mein said the local tradition and culture must be taken into consideration while finalizing the crematorium’s layout and provisions.
He also said an “all-out approach” must be taken to ensure that Namsai district has the best power scenario.
The officers apprised the DCM of the urgent need for water supply augmentation in the district headquarters.
Mein also reviewed ongoing schemes and projects, as well as new proposals aimed at boosting the development of Namsai as an aspirational district. He also discussed works to be taken up under the MLALAD fund.
The executive engineers of RWD, PWD, PHED, UD, WRD, and the hydropower and the power departments presented briefs on the activities of their departments.
Local MLA Chow Zingnu Namchoom and Deputy Commissioner Bijoy Talukdar were also present at the meeting. (DCMO)