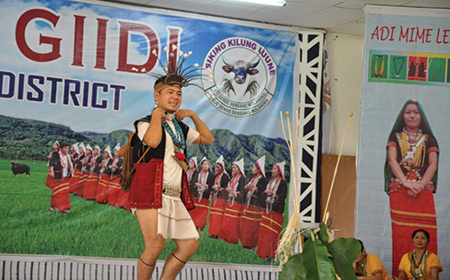 AALO, Aug 31: The celebration of Solung, the popular festival of the Adi community, got off to a colourful start at Gumin Kiin here in West Siang district on Friday.
Prominent leader from Rumgong in Siang district, T Jerang, and Boleng ADC Liyi Bagra attended the first day of the celebration. Both Jerang and Bagra emphasized the need to preserve and protect one’s culture and traditions through such celebrations.
They said festivals should always be an occasion for promoting unity and oneness among all tribes, although there may be variations in the mode of celebration.
Solung Gidi celebration president Ogong Tamuk said effort is being made to invite the people who were instrumental in celebration of Solung and Mopin festivals in the past together, “for a nostalgic congregation of the two communities.”
Various cultural programmes marked the first day of the celebration.
The cultural event this year, too, is being organized under the patronage of Central Mopin Preservation and Cultural Society president Mijum Lona.
Meanwhile, the Itanagar Solung festival committee conducted its first ever chess tournament for boys and girls below 15 years at the Solung-Mopin ground in Itanagar.
Mitet Tamuk with 3.5 points emerged the winner, while Gapo Tayeng (3.5 points) and Rahul Paleng (2 points) stood second and third, respectively.
The tournament was organized to encourage budding chess players. (With DIPRO input)