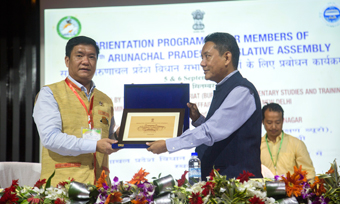 ITANAGAR, Sep 5: Emphasizing on having proper knowledge and maintaining the correct procedures of parliamentary affairs, Chief Minister Pema Khandu said training and orientation of legislative assembly members “is necessary for democracy to thrive in its truest form.”
Inaugurating a two-day orientation programme here on Thursday for the members of the 7th Arunachal Pradesh legislative assembly on ‘ways, means and procedures of legislative assembly’ as well as on the National e-Vidhan Application (NeVA), Khandu urged the elected representatives to equip themselves with knowledge to serve the people better.
He also termed the state’s 7th legislative assembly “one of the best,” irrespective of the members’ party affiliations.
Reiterating his call to work as “Team Arunachal,” the CM, however, said only sloganeering or verbal services would not suffice.
“All members need to be equipped with the latest technology and knowledge, so that they can proactively participate in meaningful and positive proceedings of the legislative assembly.
“As every profession needs proper training to succeed, elected leaders, too, need proper training to deliver. Hence this orientation programme,” he said, and expressed optimism that the next session of the legislative assembly would witness “a vast change in participation of its members.”
Khandu also underscored the importance of digitalization of the legislative assembly, saying it is for this purpose that the Centre has launched the NeVA.
“Once the legislative assembly is digitalized and assembly sessions go paperless, think of the tons of papers that would be saved, directly contributing to the state’s exchequer and to the environment,” he said.
The CM said the state government, through the IT department, has taken it upon itself to make all its offices paperless by 2021, which he said would “bring in transparency, immediate disposal of files, save public money, and contribute to the environment by checking pollution through office waste.”
Legislative Assembly Speaker PD Sona commended the attendance of almost all members, and gave assurance that the programme “is not another run-of-the-mill training” but would help the members acquire the know-how to evolve as true representatives of the people.
“When the entire world has been summed up in our smartphones, we as people’s representatives cannot remain illiterate but become e-literate,” he said, stressing the importance of participating in the technical sessions on the NeVA.
The NeVA project is a concept for enabling automation of the entire lawmaking process, tracking decisions and documents, sharing information, and bringing all legislators of the country together on one platform.
Through the NeVA, the members would be able to upload information regarding their contact details, rules of procedure, list of business, notices, bulletins, bills, starred/unstarred questions and answers, committee reports, etc, onto their hand-held devices. The citizens would also gain access to the information at their fingertips.
The two-day programme is being jointly organized by the Bureau of Parliamentary Studies & Training, the Lok Sabha secretariat and the state legislative assembly secretariat.
A team of six resources persons, headed by Union Parliamentary Affairs Ministry’s Joint Secretary Satya Prakash, will be conducting the technical sessions. (CMO)