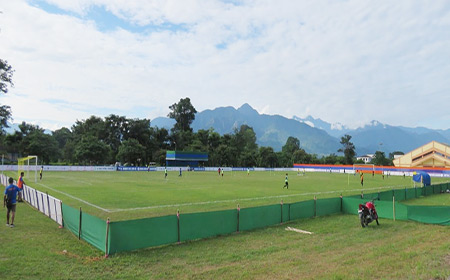 Staff Reporter
PASIGHAT, Sep 6: The preparations are almost complete for conducting the National Senior Women’s Football Championship here in East Siang district from 10 September.
“All ground works, including grass trimming and levelling of the two fields – one at the College of Horticulture and Forestry, and the other at the newly constructed stadium – to be used during the championship have been completed,” said Arunachal Pradesh Football Association (APFA) secretary Kipa Ajay.
Chief Minister Pema Khandu, who is also the president of the APFA, is overseeing the preparation works to avoid last-minute glitches.
The championship is crucial for the state not only from the sports point of view, said the APFA official.
“It will provide the 735 participating players from 30 states and UTs a rare opportunity to know and closely observe the rich culture and traditions of the people of the state during their stay here,” Ajay said.
“Besides this, it will also give a fillip to the tourism sector as they (the players) will share
their experiences with their friends and families about the unmatched scenic beauty of the state and its people, when they return home,” Ajay said.
Further, the event is also a big step forward towards women empowerment, he said.
Meanwhile, the APFA secretary informed that officials from the All India Football Federation and the teams will start arriving from Saturday. Their accommodation has been arranged at various hotels and in the main stadium.