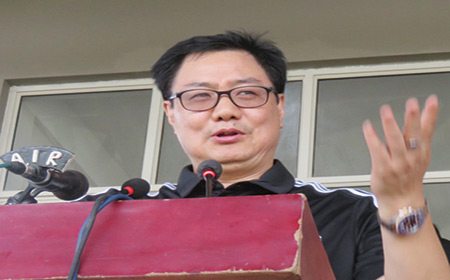 Staff Reporter
PASIGHAT, Sep 10: Union Youth Affairs & Sports Minister Kiren Rijiju exhorted the youths of the state to play sports instead of engaging themselves in unproductive activities.
Rijiju said this in an apparent reference to the mushrooming of organizations and associations in the state, in which youths are mostly involved.
Addressing the inaugural ceremony of the Senior National Women’s Football Championship here in East Siang district on Tuesday, Rijiju said
hosting the championship is a matter of pride for Arunachal, and that the championship would usher in a new era of women’s football in the state.
He said a national football league for U-17 girls would be introduced soon.
Stating that Arunachal has no dearth of sports talent, the union minister said initiatives are being taken to “produce at least four Olympians from the state in the next five to six years.”
Acknowledging the sports talent in Indian women, the union minister claimed that “women contribute more medals to the country than their male counterparts in top sports events.”
Rijiju also said a city in the Northeast may be selected as one of the venues to host the FIFA U-17 World Cup to be held in 2020 in India. He said he has already taken up the matter with All India Football Federation (AIFF) president Praful Patel to select Assam’s Guwahati as one the venues for the World Cup.
He said players from the Northeast are expected to form half the national team for the U-17 FIFA World Cup.
Chief Minister Pema Khandu, who earlier kicked off the championship, said his government has always given priority to sports and would continue to do so.
Khandu, who is also the president of the Arunachal Pradesh Football Association (APFA), said stadiums of the kind in Pasighat would be developed in every district.
He said the government, through the APFA, will launch a talent hunt/identification programme at the grassroots level to nurture young talents between six and 10 years of age.
He thanked the AIFF for shouldering the responsibility of hosting the prestigious championship, and sought cooperation from all to make the championship a grand success.
Legislative Assembly Speaker PD Sona advised the teams to play the game with true sportsmanship, saying that “the team which can accept defeat gracefully is the actual winner.”
He also advised youths to refrain from all forms of vices.
The opening ceremony was attended by, among others, Sports Minister Mama Natung, Health Minister Alo Libang, MLAs Lombo Tayeng, Ninong Ering and Kaling Moyong, Sports Director Tadar Appa, and officials of the APFA.