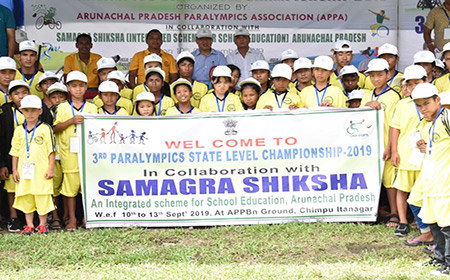 ITANAGAR, Sep 11: The 3rd Paralympics State Level Championship, organized by the Arunachal Paralympics Association in collaboration with the Samagra Shikska (Integrated Scheme for School Education) got underway at the AAPBn ground near here on Tuesday.
Around 200 persons with disabilities from across the state are participating in various track & field events, like, 100m and 400m race, javelin throw, shot put, arm-wrestling, chess, carrom, badminton, volleyball etc.
Chayang Tajo MLA Hayeng Mangfi and Samagra Shiksha Society Deputy State Project Director Nangram Pingkap attended the opening ceremony.
The official Paralympic Game was held in Rome, Italy in 1960.
On 29 July, 1948, the day of opening ceremony of the London 1948 Olympic Game, Dr Ludwing Guttman had organize the first sport competition for wheelchair athletes and he named it the Stoke Mandeville Games, and it was the milestone in Paralympics history. In that Game, 16 injured servicemen and women took part in archery.
In the year 1944, as per the request of British Government, Dr Guttman had opened a spinal injurious Centre at the Stoke Mandeville Hospital in Great Britain, and he started recreational sport for them and then to competitive sport.
The aims and objective of organizing Paralympics Games are to develop opportunities for athletes with disability in sport at all levels, to find out the hidden talents of the Divyangjan, in which they excel, to encourage them to create self confidence and generate sportsman spirit among talented persons with disabilities.