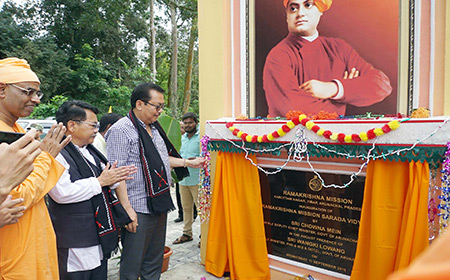 ITANAGAR, Sep 11: The Universal Brotherhood Day was held across the state on Wednesday to mark 126 years of Swami Vivekananda’s historic speech on the day in 1893 in Chicago to the delegates of the World Parliament of Religions.
Attending the concluding ceremony of the celebration at the Ramakrishna Mission, Narottam Nagar in Tirap districton Wednesday, Deputy Chief Minister Chowna Mein spoke on the relevance of the teachings of Swami Vivekananda in this day and age.
“Swami Vivekananda’s speech is more relevant today than it was when he addressed the world religious conference at Chicago and gave a call for universal brotherhood,” Mein said.
Applauding the efforts of Ramakrishna Mission for its service in the education and health sectors, besides taking up relief works, Mein assured the swamijis that as they add on to their responsibilities for the welfare of the people of Arunachal, the state government will strive more to increase its support.
“We want the Ramakrishna Mission to provide all the best possible so that our children become the best without needing to go elsewhere. I am extremely glad to know that this year’s topper for class X CBSE -Jirdam Gameh is from Ramakrishna Mission School, Narottam Nagar. I congratulate you all and hope it will continue to produce the best,” said Mein.
On the three-point memorandum submitted by the secretary of Ramakrishna Mission Narottam Nagar, the Dy CM assured that he would look into their demands and discuss the matter with concerned authorities.
Accompanying the Dy CM, Minister PHE & WS, Wangki Lowang, in his address, stressed on adopting the path of righteousness shown by Swami Vivekananda to have a better tomorrow and shared his experience with the youth.
Earlier, the Dy CM, accompanied by the minister, inaugurated the Ramakrishna Mission Sarada Vidyalaya.
Mein and Lowang also gave away prizes to the students who participated in the various competitions organized by the school.
Addressing participants in the Universal Brotherhood Day observation programme at the Vivekananda Kendra Vidyalaya (VKV) in Nirjuli on Wednesday, State Legislative Assembly Speaker Pasang Dorjee Sona said that the significance of “Universal Brotherhood which Swamiji taught us in 1893 Chicago conference is relevant even today.”
Sona said, “we should not distinguish each other based on the region, religion, caste and creed, should rather focus on peace and harmony as taught by Swami Vivekananda.” He called upon the students to follow Swami Vivekananda’s teachings to become better citizens and also to inculcate sense of oneness and brotherhood among each other to make this world a better place to live in.
Further, lauding the contributions and yeomen services rendered by the VKV in the state in education sector, Sona appealed to the teaching community to discharge their duties sincerely “for quality education of students who are the future of the nation.”
VKV Arunachal Pradesh Trust Education Officer, SC Dixitdwelt on the concept of ‘Ek Bharat, Vijayee Bharat’.
Through a Power-point presentation, Dixit also highlighted the inspiring story of the Vivekananda Rock Memorial and the activities of Vivekananda Kendra for brotherhood and harmony.
On the day, the VKV Balijan in Papum Pare district celebrated the day in the school premises, where Doimukh MLA Tana Hali Tara called on the students to take inspiration from “the real icon of the Indian youth, Swami Vivekananda.”
VKV principal TM Sathian submitted a memorandum to the MLA for infrastructure development of the school, to which Hali assured to provide all possible assistance.
Balijan Division ADC Tasso Gambo also attended the programme, where students showcased colourful cultural presentations.
At the VKV Ziro in Lower Subansiri district, the Universal Brotherhood Day was celebrated in a befitting manner with alumnus EAC Bamin Tarang and DIPRO Ramar Jokik joiningin on the celebrations.
Besides a colourful cultural programme by the students, science, physical science and language exhibitions were part of the programme, besides the mathematics laboratory, where children are taught to make mathematics fun and practical.
VKV Ziro, Principal Jai Shankar informed that the various laboratories in different genres have been set up to encourage children and let them grow to their potential.(With DCM Media Cell and Speaker Media Cell inputs)