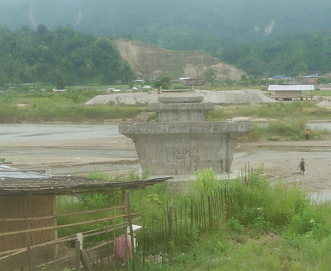 Staff Reporter
NAHARLAGUN, Sep 12: The Northeast Frontier Railway (NFR) has assured to complete the bridge to connect Borum village and Lekhi (Naharlagun) in Papum Pare district by May 2020.
NFR officials said this when Itanagar MLA Techi Kaso visited the bridge site on Thursday and enquired about the status of the project. The under-construction railway bridge project was sanctioned for Rs 111 crore in 2018 under the NFR’s corporate social responsibility scheme.
“The work on the superstructure has already begun with the start of fabrication work on the steel bridge. Also, the construction of the two-lane cement concrete (CC) approach road and the sub-structure is almost complete, except for the 200 m length CC road, which has not been taken up due to land dispute,” the officials informed.
Once completed, the bridge will connect NH 415 (Lekhi) with the Papu-Yupia Trans-Arunachal Highway at Borum, near the railway station. This bridge will considerably ease traffic congestion in Naharlagun, and also provide seamless connectivity between the ISBT and the railway station.
After taking stock of the work, Kaso requested the NFR officials to expedite the construction work and complete bridge at the earliest, saying its completion would immensely help in reducing traffic congestion in the capital complex.
Kaso assured the NFR officials of all possible help in resolving the land dispute, so that the bridge work can be completed on time.
The MLA was accompanied by the NFR’s field officials, including the site engineer.