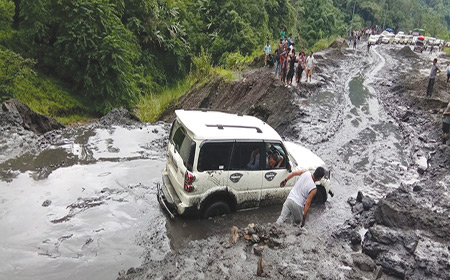 Staff Reporter
YUPIA, Sep 13: The condition of the Trans-Arunachal Highway (TAH) between Doimukh and Potin is getting worse with each passing day.
For the last one week, constant blockages on this stretch of the road have been reported. The Kala Mati area near Hoj regularly witnesses blocks. On Friday, commuters had to wait for hours for the blockage to be cleared.
There was a long line of vehicles on both sides of the block point. The commuters had a harrowing time and vehicles struggled to pass through the Kala Mati area.
Several citizens have expressed anger and frustration over the road’s condition and questioned the state government’s failure to maintain the road.
“For the last three years the Papu-Yupia and the
Doimukh-Potin stretches of the TAH have not been repaired by the PWD highway. The state government should tell us the reason for not carrying out maintenance,” said a frustrated commuter.
“Just one hour of rain leads to blockages on the Doimukh-Potin road. The condition of the whole stretch is dilapidated. This is supposedly a national highway, but no driver dares to use it at night. We simply cannot understand what is stopping the PWD highway from repairing this road,” he added.
With the road’s condition deteriorating, commuters have warned that if any untoward incident occurs, the state government, particularly the PWD highway, would have to take the blame.
“After completing the highway, the PWD highway and the contractor have completely abandoned it. Whose job is it to annually maintain this road, and why are they failing to do so? Our patience is running out. The state government cannot wash its hands off its responsibility like this,” said another angry commuter.
The Doimukh-Potin TAH is the lifeline for the people of Lower Subansiri, Kurung Kumey, Kra Daadi, Upper Subansiri, Kamle and East Kameng districts.
The entire Papu-Yupia-Potin stretch had been inaugurated union Road, Transport & Highways Minister Nitin Gadkari in 2016. Since then, the condition of this stretch of the highway has gone from bad to worse.