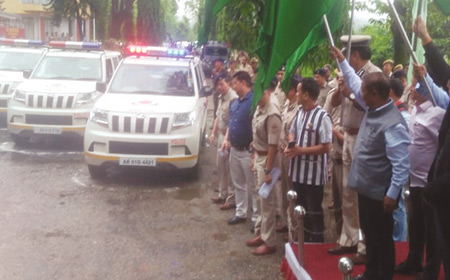 Staff Reporter
ITANAGAR, Sep 16: Home Minister Bamang Felix has said that the state government is committed to fully modernize the police department.
Addressing top-ranking police officers at the police headquarters here on Monday, Felix said the modernization is an ongoing process and would take time to be fully implemented.
“We are dependent on central grants and therefore it will take some time to fully modernize the police. Therefore I appeal to the police officials to make judicious use of whatever resources are available with them,” he said.
Felix urged the officers to ensure proper use of the vehicles and equipment provided by the home department. He also said “the government will not tolerate any attempt to create obstacles in discharging duties.”
Responding to BJP leader Phawang Lowang’s statement that “no one would be able to stop non-state actors’ interference in the political game in Tirap, Changlang and Longding areas,” the home minister said it was Lowang’s personal opinion and the government did not share the same view.
On the Tirong Aboh assassination case, he said the state government is extending every possible support to the National Investigation Agency, which is currently probing the case.
Felix along with Chief Secretary Naresh Kumar and DGP RP Upadhyaya also flagged off several new riot-control vehicles, PCR vans and foam fire tenders.
MLAs Nyato Rigia and Hayang Mangfi were also present.