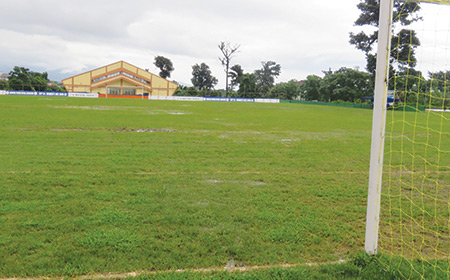 [ Prafulla Kaman ]
PASIGHAT, Sep 17: Muddy and slippery grounds owing to incessant rain continue to take a toll on the players in the 25th Senior Women’s National Football Championship being held in East Siang district.
At least seven players belonging to the Railways, Delhi, Andhra Pradesh, Chhattisgarh and Chandigarh have sustained injuries in the ongoing championship, mainly due to the slippery grounds.
The extremely slippery and puddle-ridden grounds are not only affecting the players’ performance but also causing injuries.
Several players have expressed discontentment with the pathetic condition of the fields, and said they have no choice but are compelled to play.
“We never faced such unfavourable situation in the national games held earlier. We have never played on such bad grounds at any level of competition,” said a player of the Railways, who requested not to be named.
She said the organizers should have done the needful to avoid such a situation.
Some players of Chandigarh echoed the Railways player, saying that “the muddy playgrounds are causing us great difficulties in moving the ball around.”
Meanwhile, Arunachal East MP Tapir Gao, who witnessed the opening match of the host state at the College of Horticulture & Forestry’s playground here, expressed disapproval of the playgrounds and the arrangements made.
“The condition of the playgrounds and other arrangements are poor,” Gao said, without elaborating.
When contacted, Pasighat MLA Kaling Moyong said he is not associated with the organizers.
“Officials of neither the Indian Football Federation nor the Arunachal Pradesh Football Association (APFA) consulted with us about the sports event,” the MLA said.
“Since it is a national event, the state government, other than the sports department, is not involved with it,” he said.
Mebo MLA Lombo Tayeng also refused to issue any comment on the arrangements made by the organizers.
However, APFA secretary Kipa Ajay rubbished the allegations, claiming that he was receiving “positive feedbacks and response from the team coaches.”
Denying that there is any serious problem or lapses in the arrangement, Ajay said: “We did not expect such untimely rainfall during this season. Incessant rain during this season is not a regular phenomenon in the region.”
He added: “Despite our best efforts, some unscrupulous people are making propaganda and spreading false information, hiding the facts.”
The championship has been marked by incessant rain, which continues since 8 September, becoming heavier from day one of the event, compelling the organizers to arrange alternative match venues – one at the IGJ higher secondary school ground here, and another in Kiyit village in Mebo, around 35 kms from here.