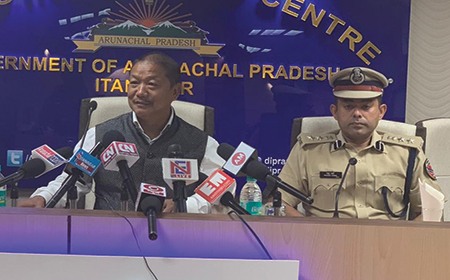 Staff Reporter
ITANAGAR, Sep 21: Home Minister Bamang Felix on Saturday said the Humara Arunachal Abhiyan (HAA) – a social campaign to instill a sense of responsibility among the state’s people with regard to law and order issues – “is targeted to be carried, executed and managed by the people for the people.”
Addressing journalists a day after the HAA website was launched, the home minister said the campaign will largely focus on creating awareness about the laws, changing the people’s negative perception of law enforcing agencies, promoting police-public partnership, and promoting coordination between communities to build communal harmony.
“Humara Arunachal Abhiyan will carry within it many sub-campaigns which will in turn delve into every social evil in our society,” Felix said.
The themes of some of the sub-campaigns are ‘vigilant people, responsible Arunachal’, domestic violence and crime against
women, child labour, drug abuse, traffic management, and ‘one Arunachal, unified Arunachal’.
Felix said the campaign is aimed at making Arunachal one of the top five best policing states of India. Currently, the state is ranked 18th.
The home minister said the objectives of the HAA would be “to bring about police-public partnership for better law and order maintenance; to instill a sense of security and confidence among entrepreneurs, outside investors and tourists; and to make Arunachal a safe state for each and every individual.”
He sought the media’s cooperation, saying no campaign would be successful without the assistance of the fourth estate.
“The very purpose of today’s press conference is to seek your kind cooperation in making HAA a mass movement, as you are the ears, eyes and mouthpiece of the common public,” Felix told the journalists.
“HAA will be launched on 2 October. Let’s join hands and come forward -Chalo banaye behtar Arunachal (let’s make a better Arunachal),” the home minister said.
AIGP Madhur Verma, who was also present, said the campaign is a “community-police initiative, and the community will be given the responsibility to maintain and create awareness on laws.”