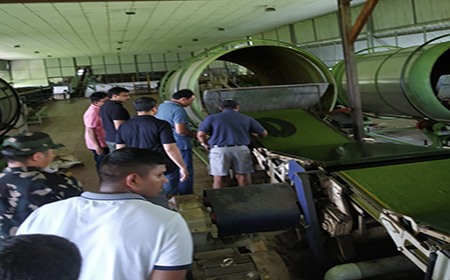 Staff Reporter
SONAJULI, Sep 20: A truck carrying a consignment of tea from the Papumpare Tea Estate Pvt Ltd here in Papum Pare district to the Gauhati Tea Blending and Warehousing Company in Assam has reportedly gone missing.
The consignment was being moved through the Maa Kamakhya Cargo Movers.
Manoj Tiyagi, the general manager of the tea estate, informed that 9,330 kgs of tea were dispatched on 13 September from the estate, to be delivered to the warehouse in Assam. As per an FIR lodged at the Banderdewa police station on 15 September, the consignment, which
had been dispatched by a truck with the registration number AS-12AC-0939, has not been delivered to the officials of the tea blending and warehousing company.
The driver of the truck has been identified in the FIR as one Subahan Ali, of Singaghat in Dhubri district of Assam. The owner of the truck, one Natwarlal, of Sonitpur district in Assam, could not be contacted as the mobile phones of both the owner and the driver were switched off, the FIR stated.
Banderdewa police station OC RK Jha informed that a case under Section 120 (B) 407 of the IPC has been registered in the matter.
“One person has been detained for interrogation. However, the matter is under investigation,” the OC said.