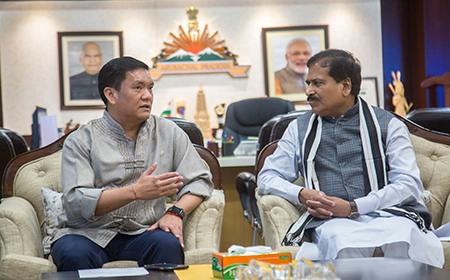 ITANAGAR, Sep 21: Union minister Suresh Angadi on Saturday said all railway projects in Arunachal Pradesh would be fast-tracked and no stone would be left unturned to complete them on time.
The MoS for Railways was here to review various railway projects in the remote northeastern state, and also held a meeting with Chief Minister Pema Khandu.
On the CM’s request to increase the frequency of the Shatabdi Express, as it only runs thrice a week, Angadi said directives have already been issued to railway officials to study the feasibility, an official release said.
The CM also requested Angadi to connect Arunachal Express to Mukongselek. The MoS said that soon the Arunachal Express would be upgraded to Rajdhani Express.
“Arunachal Express will become Arunachal Rajdhani Express soon. As all Rajdhani Express trains are meant to connect state capitals, it won’t be feasible right now to connect Murkongselek with the Arunachal Express,” he said.
Hailing Arunachal for its natural bounty, Angadi said Prime Minister Narendra Modi is giving special preference to the Northeast in terms of connectivity and the railway ministry is duty-bound to reach out to states like Arunachal.
To another request, the minister assured that all old coaches of the trains coming to Itanagar are being replaced in a phased manner. He informed that all trains would soon have brand new and new-age coaches.
Angadi also informed that an arrangement has already been reached with the Indian Oil Corporation (IOC) for ferrying its products to Gumto, where the IOC has its distribution plant, through train.
This, he said, would ease traffic congestion as well as ensure regular and timely supply of petroleum products to the state.
Expressing gratitude to the minister for the attention given by the Centre for development of railway connectivity in the frontier state, Khandu emphasized that connectivity is the only bottleneck for the otherwise potential state.
He sought special attention of the ministry in providing optimum railway connectivity in the state and urged the Railways to speed up the work on the Sela tunnel to pave way for a railway line to Tawang from Bhalukpong.
The chief minister also requested the ministry to extend the route of the Kamkhya Express at least up to Dibrugarh. He reasoned that the extension would facilitate travel by tourists, especially devotees coming to Parashuram Kund in Lohit district.
Khandu also requested the minister for fixing the rate of land compensation for railway tracks as fixed and offered to Assam, which the ministry has accepted, the communiqué added. (PTI)