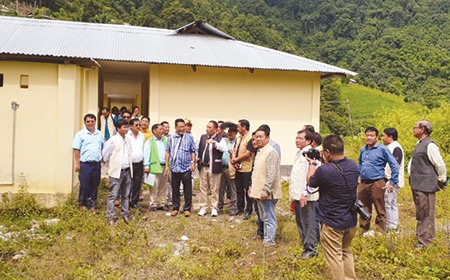 RAGA, Sep 22: The Nyishi Elite Society (NES) on Saturday adopted the government higher secondary school (GHSS) here in Kamle district as part of its school adoption programme (SAP) in Nyishi inhabited areas.
Speaking on the occasion, NES president Bengia Tolum said, “Nyishi is termed communal, which is totally false, as the NES is always fighting for the cause of the Nyishi tribe and its rights and privileges, which is much-needed for our development, compared to other tribes of the state.”
Tolum clarified that the SAP does not mean that the NES would provide fund, but that “it is an initiative to motivate stakeholders and the administrations, so that they come together and work for the development of the adopted schools and for the progress of education in the Nyishi community in particular and the state in general.”
He requested all stakeholders to work in close coordination for the development of the education sector and the society as a whole.
Tolum also requested the landowners on the TAH to cooperate with the administration “as road is one of the most important components of development of an area and the society.”
Local MLA Tarin Dakpe said “the education scenario of the state is very bad, and it can improve only if all stakeholders join hands.”
He stressed on establishing inter-village schools in areas “where several schools are defunct and not functioning.”
The MLA said he would take the initiative for construction of boys’ hostels at all seven GHSS’ in the Raga assembly constituency and send a proposal to the government in this regard.
Informing that the reassessment of the TAH will begin on 10 October from Lower Subansiri and Upper Subansiri districts, he urged the landowners to cooperate in the undertaking, so that the TAH work in Kamle is carried out smoothly.
NES general secretary Heri Maring said the NES has so far adopted seven schools in all seven Nyishi inhabited districts. He urged parents also to guide their children and keep them away from the clutches of drugs.
Maring also requested DC M Loyi to constitute an “anti-drug squad” and take strict action against those involved in spreading the drug menace.
The DC commended the NES for the programme and gave assurance that the administration would fully support the development of all sectors, including the education sector.