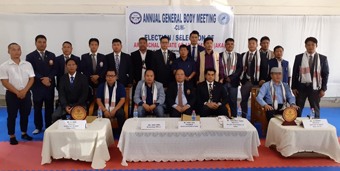 Staff Reporter
NAHARLAGUN, Sep 27: Arunachal Karate Do Association (AKA) president Likha Tara exhorted his team to gear up their activities to grab the numero uno position in national karate.
“With your extra effort and dedication, we can achieve the goal,” Tara told his team and the district associations while addressing the AKA’s annual general meeting here on Friday.
Arunachal is currently ranked third in the national karate ranking, he said.
Tara, who has been reelected to the post of the AKA president, urged the karatekas to work hard and sharpen their skills through proper coaching and training.
“I have seen performances by the best karatekas of the world, and there is hardly anything to distinguish between them and the players from Arunachal when it comes to performance,” Tara, who is also the president of the Karate Association of India (KAI), said.
KAI general secretary Ambedkar Gupta said karate in India “is on a transition phase.”
He said Arunachal has produced many a talented player, and expressed hope that the state would become a force to be reckoned with in karate within very a short period.
Arunachal Olympic Association senior vice president Gechi Doke described karate as one of the most popular sports in the state, and lauded Tara for his selfless services for the promotion of the sport in the state.
S Deben Sharma, who has been elected as the AKA general secretary, advised the district associations to take proper care of the promising karatekas, particularly those who get selected to represent the country, by way of providing necessary coaching and training.
He gave emphasis on proper coaching and training, particularly to the young karatekas.
Senior vice president Bulang Marik, who had been holding the post of the AKA general secretary for more than 12 years before his new assignment, highlighted the various achievements as well as the hardships faced by the AKA.
DSO OB Meitei also spoke.
AKA vice president Yarda Niki highlighted the association’s journey since 1994, and the contributions made by Tara for promotion of karate in the state in the last four decades.
Another vice president, Charu Tatung, emphasized the role of coaches in players’ success.
Technical director Dr Marli Ete emphasized the need for creating awareness among parents and guardians that their wards can build careers out of sports, saying, “Parents’ role is vital for the children’s career development.”
Senior player Sinne Mikhu highlighted the problems faced by the players while participating in international events due to financial problem, which, he said, “greatly affect the players’ performance,” while joint secretary P Nobin Jomoh advised the players to save the reimbursed money and the incentives given to them by the government for participation in future events.
Earlier, treasurer Tai Hipik gave the audit details.
The meeting made it mandatory for all the district karate associations to conduct district level tournaments.
The meeting was attended by the presidents and general secretaries of the district karate associations.
Earlier, the AKA elected its 13-member executive committee for a period of four years.