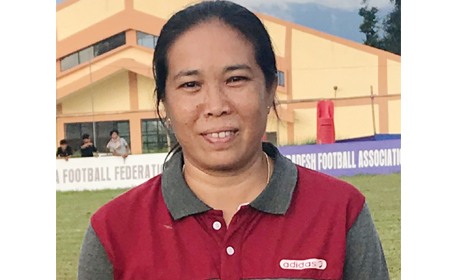 Indian football legend, Oinam Bem Bem Devi, says that for Indian women’s football to progress there should be more facilities, financial incentives, and more tournaments.
The Arunachal Times’ Tongam Rina spoke with Bem Bem Devi in Pasighat on 25 September, the day after the Manipur women’s football team won the national football championship for a record 20th time. Devi is the team manager of Manipur.

What are the reasons behind Manipur’s success – a sporting powerhouse that has won the national football championship for the record 20th time?
Bem Bem Devi: In Manipur every sport is popular, but football is very popular. Football is played in every village.
The All Manipur Football Association (AMFA) has a grassroots development programme through which tournaments are organized in all the districts for boys and girls for six months.
During the grassroots development programme, we search for players of various age categories, starting from Under-6. It’s a step-by-step process. School tournaments are also organized by the youth affairs ministry and the AMFA.
There is a state league too, which is starting on 10 October. The players who represented the state in this national championship will be playing against each other in the state league.
There is a huge competition to make it to the senior team. For the senior nationals, we had to choose from 70 players, all good players. They had to undergo a rigorous selection process before we finalized on 22.

There are huge differences in terms of facilities for women and men footballers. What should be done to ensure facilities for women’s football?
Bem Bem Devi: There is a huge difference in facilities, including monetary. Boys have the I-League, the Indian Super League for six months. It’s not the case with women players. In terms of financial incentives, women players get money only in the India League, which started for women in 2016. The only way women players can be financially secure is by getting jobs.
I request the All India Football federation (AIFF) to help women players get jobs. They can recommend jobs for players who have done well. There has to be institutional support. States should also see what kind of opportunities should be given to players who have performed well nationally and internationally. There should be sports policies across the country. Players have to constantly worry about jobs and financial stability, which should not be the case.

What are the problems women footballers have to face?
Bem Bem Devi: Earlier, people would always ask why females should play football, which is gradually changing now. There was always pressure to find financial security. Unlike in other parts of India, there is no pressure on women to marry early in North east, but there is always pressure to be financially stable.
In my case, there were financial hardships. There was not enough money and there was no one to help. There wasn’t even money for sports kit.
I see some changes now, as the AIFF has tied up with some companies for promotion of sports. But we had to face a lot of problems. There were no travelling concessions. In 2003, we had to ask for airfare if we had to play outside the state. Now, for national camps, at least the players are getting airfares.

The lack of facilities in Pasighat left fans and players disappointed. What went wrong?
Bem Bem Devi: This was well-organized event, though rain marred it. The AIFF and the Arunachal Pradesh Football Association (APFA) cannot be faulted for the rain. The association has done a good job by organizing the senior national football tournament. Keeping in mind the timing of the weather (rain), the Indian Women’s League should be organized here.

What do you think is the scope for women’s football in Arunachal?
Bem Bem Devi: Arunachal reached the sub-junior girls’ final last year, and Pasighat hosted the senior nationals. I was very impressed and happy with both the news.
Soon, there will be a good senior women’s team from Arunachal, since the junior girls are doing very well.
The crowd in Pasighat was huge, which means that there is support for football. The APFA has to search for good players and organize tournaments, so that girls get the opportunity to play. The association has to find good coaches.

Pasighat football fans turned out in huge numbers. Are such crowds usual for women’s matches?
Bem Bem Devi: All the participating teams were pleasantly surprised at the huge turnout of fans. I did not expect so many crowds. It was an amazing experience. There are plenty of female fans, which is extraordinary. In Imphal, the matches are well attended by fans, but most of them are men. In Pasighat, there were more women. You had old, young, children – all of them. Hours before the matches, the ground would be already filled by the fans. In the 21 years of my playing career, I have rarely seen such crowds and huge support.
I remember the South Asian Games in Guwahati in 2016, which was also my final game for India, where the stadium was filled to capacity. There were fans from Shillong and elsewhere. But that was just one day. In Pasighat, there were fans at all the matches. It was crowded, and the support was overwhelming. I took pictures of the crowd during the half-time to send to my family, friends and colleagues.
With crowd support, football becomes more fun, and the players are motivated. The crowds supported all the teams, but they supported Manipur the most.

You started playing for the Indian national side very early.
Bem Bem Devi: I started playing football when I was about 10 years old. I played with boys. But my father said I should not play football. I was also good in studies, so he wanted me to concentrate on studies.
But I would always find excuses to play, which would often lead to beatings by my dad. One day he threatened to burn my books if I continued to play football. So I told him that I would play and also continue doing well in studies. I really had to convince him a lot.
I joined a club in 1991. In the same year, I was selected for the Manipur sub-junior team. That’s how my playing career started. I started playing for the senior national team when I was 15 years old.

What is your message for upcoming football players?
Bem Bem Devi: Not all families will be supportive of your career choice. Make effort, so that families understand. Without family support, it’s difficult to play.
Make use of whatever football facilities are available. Players have to work hard. Follow the tips and guidance given by the coaches. Maintain discipline on and off the field. Players have to learn to respect fellow players, coaches. These are important. Even if you are a good player, if you are not disciplined, it is unlikely that you will succeed. Discipline is most important, along with hard work.