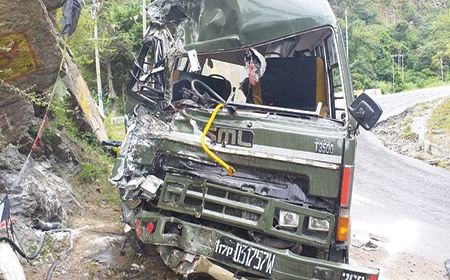 RUPA, Sep 28: Four people died when an Army vehicle with ex-army personnel and their families on board met with an accident at Chug bridge here in West Kameng district on Friday.
The bus, belonging to the 14 Kumaon Regiment, was on its way from Tawang to Rupa. The ex-personnel were to attend the veterans’ rally which was scheduled to be held at Rupa on 28 September.
Official sources quoted eyewitnesses as saying that the incident occurred at around 7 pm, when the driver lost control of the vehicle after an apparent brake failure. The driver drove the bus into the hillside in order to prevent it from tumbling down into the river on the opposite side of the road.
While the driver and one passenger were killed on the spot, the two others died later.
The deceased have been identified as driver Mukhesh Kumar Yadav of the 18 Kumaon Regiment, and Norbu, Tsong Norbu and Passang, all natives of Tawang.
The 13 injured persons were rushed to the military hospital in Dahung, where their condition is stated to be stable.