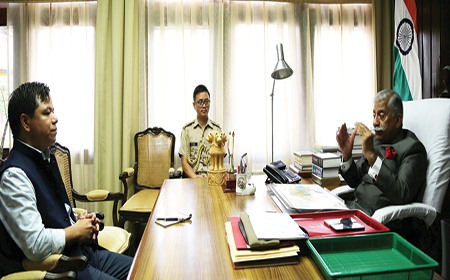 ITANAGAR, Oct 3: Nampong MLA Laisam Simai called on Governor BD Mishra here at the Raj Bhavan on Thursday and held discussions on border trade from Pangsau Pass, near Nampong in Changlang district with Myanmar.
The governor said that cross-border trade is an effective mechanism for boosting the local economy as well as social development, especially along the international boundaries.
“Border trade route with Myanmar will help boost the local economy and promote cultural exchange between India and Myanmar,” he said and advised the Nampong MLA to take initiative to start it at the earliest.
The governor, who visited the border trade point at Nampong, advised the MLA to visit Moreh in Manipur with a study group to make the Pangsau Pass border huts more effective and secure.
On his part, the governor spoke to his counterpart, Manipur Governor Najma Heptulla to facilitate the visit of the team of Deputy Speaker Tesam Pongte and MLA Laisam Simai from Arunachal Pradesh to Moreh.
The governor said that arrangements for border trade and tourist visits at Pangsau Pass should be made the best in the country. He also advised the MLA to convene meetings to promote homestay provisions during Pangsau Pass Festival in Nampong Town. (PRO to Raj Bhavan)