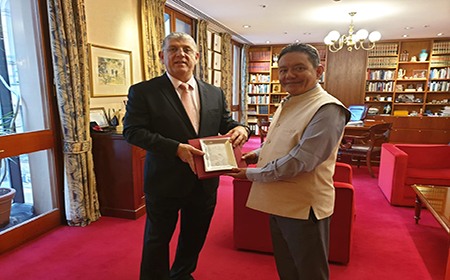 SYDNEY, Oct 4: Arunachal Legislative Assembly Speaker PD Sona on Friday visited the parliament of New South Wales (NSW) here in Australia.
He was accompanied by the consul general of the Indian high commission to the parliament.
Sona called on John Ajaka, President of the Legislative Council of NSW. Ajaka has been a Liberal Party member of the council since 2007, and has served as the minister for ageing, minister for disability services, minister for multiculturalism, etc.
Ajaka showed the speaker around the parliament and both the houses. The NSW parliament is bicameral. The lower house has 93 members, and the upper house has 42 members. Ajaka and Sona discussed the functioning of both the houses, and the outreach programmes that are conducted by the parliament.
“Our assembly is also working on a module of outreach programme which will give impetus to literary activities and arts. I believe this will help in honing the talents of our younger generation,” Sona said.
He added that “our assembly should not be a mere centre for legislation. It should become a centre for learning also. We have a good library, and a state-of-the-art museum is also coming up. This should come up as a research centre for scholars too.”
The speaker invited Ajaka to visit Arunachal in April next year, when the latter will be attending the Executive Committee of Commonwealth Parliamentary Association in Assam.
Sona is currently on a post-Commonwealth Parliamentary Conference tour of New Zealand and Australia. (PRO)