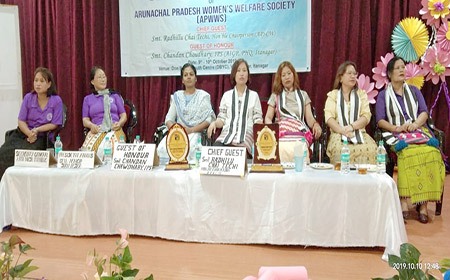 Staff reporter
ITANAGAR, Oct 10: The Arunachal Pradesh Women’s Welfare Society (APWWS) has said that persons with multiple wives should not be given tickets for the panchayat and the legislative assembly elections.
The call came during the 40th foundation day celebration of the APWWS here on 10 October.
Advocating ‘one man, one wife’ status, the APWWS also said that the Central Civil Services (Conduct) Rules should be implemented in the state to stop further practice of polygamy and adultery by government employees. It said that rich and well-qualified officers in the state have indulged in such practices, and that many families would be saved from distress if the rule is implemented. 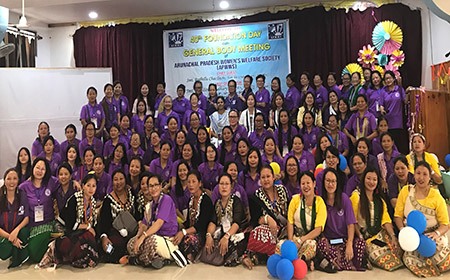 The APWWS submitted a representation in this regard to Arunachal Pradesh State Commission for Women (APSCW) Chairperson, Radhilu Chai Techi, during the foundation day celebration.
While submitting the resolution, which was drawn up during the two-day event – which was also attended by APWWS branch members from other parts of the state – outgoing APWWS CEC president, Dipti Bengia Tadar, urged the APSCW to pursue the government to set up more de-addiction centres in the districts with high incidences of drug addiction, with all the required facilities.
The resolution also called for establishing more women police stations and shelter homes, stating that the crime rate, sex work and substance abuse are on the rise.
The APWWS further said that setting up liquor shops near schools should be banned, and that local alcoholic brews should not be encouraged, as they have the same effect as foreign liquors.
The APWWS also urged the commission to organise a ‘mass awareness-cum-debate/discussion’ with various stakeholders on the tribal customary practices on property rights and land acquisition rights/lease.
Meanwhile, the APSCW chairperson said the state government should implement 33 percent reservation for women in government jobs. She also called for 50 percent reservation for women in the PRIs, and 33 percent reservation in the state legislature.
“Political empowerment is needed for women empowerment,” Techi said.
She further said that compulsory registration of marriage “is a must to control polygamy and child marriages.”
The APSCW chairperson also said “the time has come for all stakeholders to come together to discuss inheritance rights for women.”
Techi also lamented that while cases of domestic violence are reported regularly in the state, there are no independent protection officers to look into cases of violence against women. She said the government should allocate funds for appointment of protection officers, adding that cases of crimes against women and children in the state are “alarming.”
Techi further said that “the government is not consulting the commission on women-related issues.”
AIGP (PHQ) Chandan Chaudhary, who also attended the event, acknowledged the role of the APWWS in curbing child marriages in the state. She said gender roles are assigned by the families, and that it needs to change.
“We should teach our sons to take up household responsibilities,” she said, adding that “women still have to balance professional and domestic work.”
“The greatest responsibility lies with the women, as they are the creators of the future. Women should support one another,” she said.
Meanwhile, the APWWS will be led by Gumri Ringu as president and Kani Nada Maling as its secretary-general.