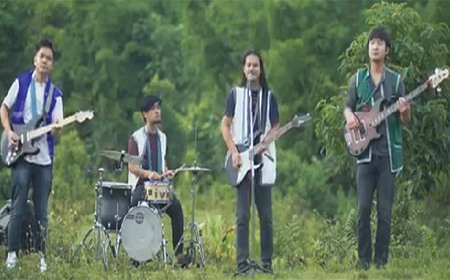 ITANAGAR, Oct 12: David Angu on Saturday released his first folk rock single ‘Ho Delo’, a song resonating old age traditions of the Galos, as part of his project: ‘David Angu & The Tribe’.
The song is a reminiscent of an old-age oral tradition of the Galos, and sung in groups before any major event of the community to raise everyone’s spirits, such as before leaving for the forest to fence cattle, before heading to the fields or other important community work.
“The ballad speaks of words of wisdom shared by the forefathers and our responsibility to follow them through; to remember our traditions and culture no matter where we go,” says David.
David has been in the North East music circle for a while now. After playing and exploring classic rock and glam rock for a few years as a lead guitarist and main vocalist, he has come up with the project, David Angu & The Tribe.
“This project is solely dedicated to exploring the tribal folk melodies from Tani tribes of Arunachal,” he adds.
Shot in Angu village of West Siang district, the video for Ho Delo has also been released. The video shows Galo men carrying on with their daily activities in jovial moods. The moving images fit perfectly with what the song intends to say. The video for ‘Ho Delo’ is currently available on YouTube.