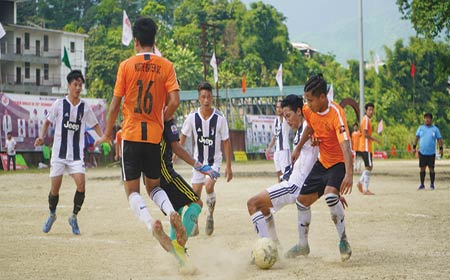 CHIMPU, Oct 13: Notte Bateh SC, Pigey Poro FC, Gohpur SC, Hakang Haya and Champion FCs advanced to the next round of the 25th Vishwakarma Running Trophy Football Tournament being held here.
Notte Bateh SC entered into the round of 16 with a 5-2 win over Ward No.7 here on Sunday, while Pigey Poro FC beat Damsite United 5-2 to book their berth in the last 16.
Both Ward No 7 and Damsite United were eliminated from the tournament.
In another match, Hakang Haya FC beat Champion FC 4-3. However, both the teams advanced to the next round.
Earlier in the first match, Gohpur SC played out a 1-1 draw against Yapa Mwda FC. However, the draw could not help Yapa Mwda FC to advance to the next round.
In the last match, Green Pioneer’s FC beat East Arrow FC 8-4. However, both the teams were eliminated from the tournament.