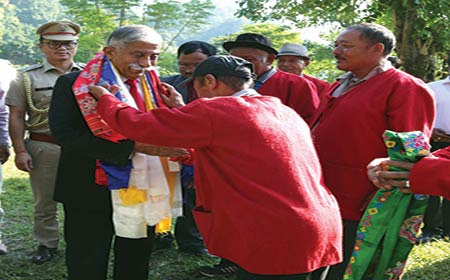 BALEMU, Oct 14: Governor BD Mishra advised the youths of the state to become job creators rather than job seekers by involving themselves in various income generating activities.
The governor, who is currently on a three-day tour of West Kameng district, advised the people here on Monday that they should avail the benefits of the various self-sustainable and job creating schemes and programmes launched by the state and the central governments.
Interacting with the district officials, gaon burahs and public, he spoke of programmes, like ‘Stand Up’, ‘Startup’, Make in India’ etc, and urged senior citizens, particularly the gaon burahs to motivate and guide the youth towards entrepreneurship and self-employment.
Mishra also advised the youth to take up poultry, piggery, sericulture, vegetable farming.
Highlighting the importance of education for progress and prosperity of the nation, he urged the gaon burahs to ensure that every child above six years must go to school.
“The state and the central governments are doing their duty; now it is the duty of every citizen to see that programmes and projects are implemented on the ground in letter and spirit,” the governor said.
Replying to a request from the public for mobile connectivity, the governor said the government is pursuing it with the department concerned. Mishra also said that he had already taken up the matter with the union minister for telecommunication.
Earlier, the governor was accorded a traditional reception on his arrival here by the people led the Deputy Commissioner in-charge Gombu Tsering and SP Raja Banthia. (PRO to Raj Bhavan).